The Day of St. Nicholas, Nikola in Bulgarian, is celebrated on December 6 and is one of the most respected traditional holidays in this country to this very day. In every home a fish dish is prepared for that great day. St. Nicholas is most popular as patron of the sea, rivers and lakes, of fishermen and sailors. Folk tradition adds that the saint is also the master of winter colds and snow. And he is also revered as the guardian of the family and the family property.

An ancient legend recounts of a mysterious monastery of St. Nikola near the village of Chepitovo. All that could be seen from the monastery was a single iron door hidden in a splash of greenery. However the door opened for only few people. Once a village woman was washing nearby, at the lake. All of a sudden the mysterious door swung open for her. The women got in and fearless, went further. Very soon she came across an old man, St. Nikola himself. He asked her how she had come there, and she told him. "Well, then, the old man said, I'll now show you the underground world." Soon they saw a fairly-tale monastery, built of marble. A treasure of gold coins was being kept in its church. When she was back home, the woman was impatient to tell the story. Now everybody rushed to search for the gold treasure but nobody opened the door, because St. Nikola was guarding it from greedy eyes. The legend further goes that once the door opened for a poor fisherman. He too saw the wonderful monastery and the treasure, but he told no one of his encounter with St. Nikola as he was cautious not to trigger human greed for gold. It is believed that two icons have survived in the village from that monastery. They were hanging tied with chains in front of the local inn. Many times Ottoman Turks who then dominated Bulgaria, tried to destroy the icons by throwing them in the lake, but they invariably reappeared. St. Nikola forecast that when the Bulgarian Christians were liberated from the Ottoman Muslim yoke this fairy-tale monastery would appear in the middle of the village.

We continue with a similar story sung in a folk song from the region of Sofia. In it St. Nikola started to build a church that would suit the grandeur of God, with walls of silk and silver, and with a roof of gold. But before finishing the last door, the gold was over. Then St. Nikola became a monk and went among people. They donated as much as they could, to build the church. However the raised funds were not enough. So, a solution occurred to him. He took his dense fishing-net, threw them in the white sacred sea, and a barbell got caught in it. A priceless stone shone on its head. St. Nikola took it and completed the magnificent church. And the catch he gave to people, to eat fish and drink wine to the glory of God.

In the Bulgarian traditional beliefs, St. Nikola was the son of St. Andrew, Andrey in Bulgarian whose day is celebrated a week earlier, on 30 Nov. St. Nikola had two sisters - St.Varvara and St. Sava. Their days are on 4 and 5 Dec. To honor Varvara small loaves of bread were prepared, and were given to children to protect them from illness. On the Day of Sava, the baked carp for St. Nicholas Day was prepared. These three holidays give the start to the Xmas ritual cycle. In some village the Day of St. Varvara is even known as Women's Xmas. On St. Nicholas day the dinner table is consecrated with burning incense, just like on Christmas Eve 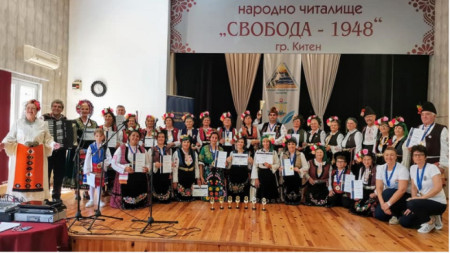