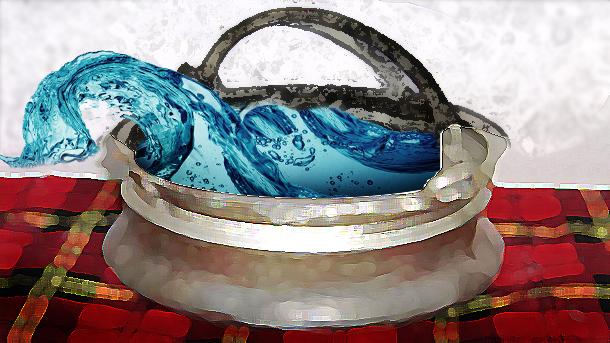 Essential element and a symbol of earthly life, water holds a special place in the mythology of all peoples. Its purification and blessing force is present in the various religious systems of the world. For Bulgarians water is a symbol of purity; it is the physical intermediary between earth and afterlife. Water has healing powers and is used to chase away evil forces. This becomes especially true after Epiphany - January 6. During the same month, there are several important dates on which rituals related to water are performed.

According to folk tales and legends, in the beginning the earth was completely covered with water. God created man and gave him a small piece of land. A large river separates this from the other world. Souls of the deceased should cross it to move to the next level. Understanding the dual power of water is the foundation of the great respect that Bulgarians have towards it. It is not only a benevolent force, but also an uncontrollable element that brings a lot of trouble. Mythical creatures also live in water basins. When there is a thunderstorm people used to say that dragons (zmey) were fighting. Water containers at home should be well covered in order to stop some mythical creature from enchanting the blessed liquid. Yet there are rituals where water that was carried by a lass in complete silence or water left all night under the starry sky with herbs dipped in it, is considered blessed.

Water has the greatest strength on Epiphany when God himself blesses all the water on earth. That is when the first ritual bath for the New Year takes place.

Early in the morning of January 5, the day before Theophany, everyone takes some holy water from the church to bring home. Moreover, a priest goes from house to house blessing people. This ritual chases away evil spirits. In many places, young men meet and elect a leader who is proclaimed priest. They go from door to door to taking up the function of the real priest and perform the ritual.

In Northern Bulgaria a custom called “Sovoinitsi” exists, which is also performed on January 5 by a group of young girls. They sing love songs and splash water on people, homes and livestock.

On January 7, the Orthodox Church honors John the Baptist. In Bulgaria the day is called ‘Ivanovden’ and it is a celebration for all who bear the name of the saint. On this day water rituals continue.

The cleansing power of water in January reaches domestic animals, too. People bless cattle with holy water on St. Anthony’s Day (17.01) and St. Athanasius Day (18:01). In folk tradition these days are dedicated to two brothers who were blacksmiths - Anton and Atanas, whom Bulgarians honored as patron saints of diseases and especially of the plague.

During the first month of the year, Midwives' Day (Babinden) also takes place. Predominantly women who recently gave birth take part in it. This is the only festival in the folk calendar, which allows women to have it all - to have fun, drink alcohol, even to mock the male part of the community. On this day, they are not subject to any penalty. Men look not to be around the women as they risked women loosening their belts or even undressing them. If men wanted to be left alone they had to pay money. This day is sometimes marked on January 8 but more often it is celebrated on January 21.

Unlike Epiphany and Ivanovden, it is not connected to a Christian feast. The morning begins with a Babinden ritual hand washing. Women who have small children put basil and geranium in the water. They prepare a new soap bar and a towel and go to the home of the grandmother midwife. The garden is watered as well as the stairs of the house. Then the midwife visits the houses in which she assisted in childbirth in the past year and bathes the children. In the evening it is time for the midwife to get a bath herself. Women take her to the river and throw her in. After that they kiss her hands and giver her money. A festive horo dance follows.