Balkan Alien Sound: all the way from the Balkans to the Emerald Isle through music 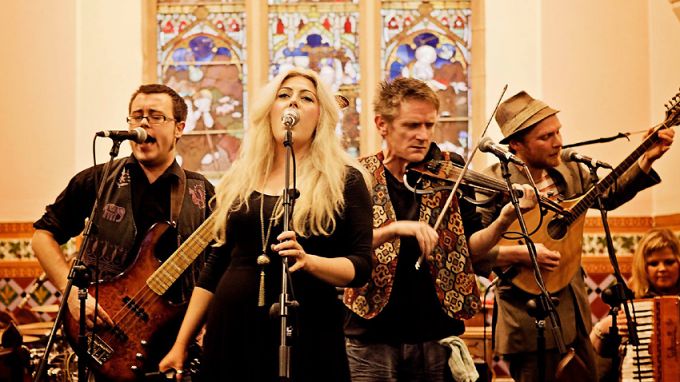 Photo: Hanna Michtel
Few Bulgarians would be able to pinpoint on the map the second-biggest city in Northern Ireland, but their curiosity will surely be sparked once they learn they can go to a folk club there and dance to the rhythms of Bulgarian folk music? Since 2007, the music scene in Derry already has a solid Balkan presence and interestingly enough, it is delivered to the audience by a bunch of musicians of various music backgrounds yet none of them from the Balkans. Brought together by their common passion for the successful blend between local melodies and the musical diversity of Eastern Europe, seven Irish musicians gather crowds at their gigs, dancing to tunes they only later recognize are not originally Irish – and it’s all done it under a really catchy name – the Balkan Alien Sound.

Bouzouki player Martin Coyle, one of the founder members of the band, says Bulgarian folk music has it all – amazing melodies, fast-paced dances, and virtuosity. Among his favorite Bulgarian folk musicians are clarinetist Ivo Papazov, tamboura player Rumen Sirakov, and accordionist Martin Lyubenov. But how did his personal love story with the musical legacy of the Balkans evolve? “My first introduction to Balkan music was through an Irish folk-musician called Andy Irvine who brought some Bulgarian folk tunes to Ireland with his group Planxty in the 1970s, some tunes like smeseno horo or mominsko horo”, Marty Coyle recalls. “The music seemed to really stick with Irish music and instrumentation, and after that it seemed really natural to follow. So I followed in Andy Irvine’s footsteps and for 6 or 7 summers I went through Eastern Europe, listening to music and meeting people, collecting music to bring back to Ireland. I went through Macedonia, Romania, Serbia, Slovakia, of course, Bulgaria, and stayed usually three months at a time, meeting families and musicians, trying to absorb the sounds and listen to as much music as possible. It wasn’t until I got back to Ireland that I approached some of my friends who were band members, showed them the music and we thought it was a really exciting project to get involved in as it’s translated very well into our style of playing.”