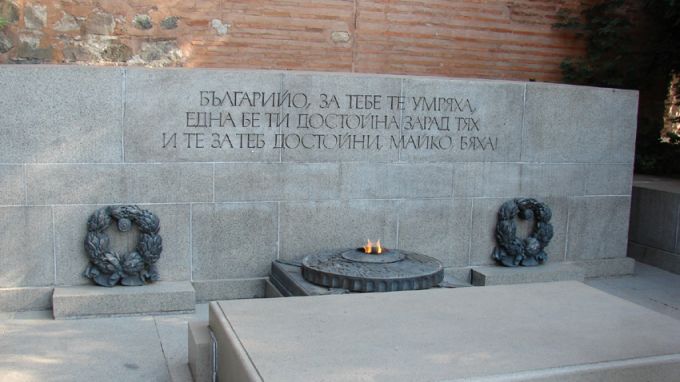 It is 35 years since the Monument to the Unknown Soldier was erected in Sofia, though its story is not that simple –  actually, it is 35 years since the inauguration of the monument as it now stands.
The first monument of this kind was put up in Great Britain in 1920 and many other countries who took part in World War I followed suit. The story of the Bulgarian equivalent is fraught with stumbling blocks of all kinds. Its appearance was altered more than once, but the symbolism it conveys has remained the same.

Here is more about the monument and its history from Dr. Alexander Mirkov, chief curator of the Museum of History in Sofia:

“A commission was selected in 1918 for making an architectural monument like this. Four years later the Minister of Education Stoyan Omarchevski proposed that a fund be set up to raise the money needed. The political turmoil in the country at the time put a spoke in the wheels of this idea. On 14 December, 1926 a special commission headed by Minister of War, General Ivan Vulkov entrusted sculptor Andrey Nikolov with the work. The spot where it was to be erected was also selected – the southern side of St. Sofia church. It was decided that the monument should be the symbolic tomb of all known and unknown Bulgarian soldiers who lost their lives in the struggles for the liberation, reunification and defence of Bulgaria.”

After much hesitation what the monument should look like and where it should stand exactly, the project was finally given the go-ahead. When was the monument actually inaugurated and what has its fate been?

“The official inauguration was in 1941 and the last word in this was that of Tsar Boris III. The composition incorporated several principal elements. The central figure was that of a lion made of bronze as the symbol of the nation. The monument had a granite sarcophagus-plinth in bronze relief with two metal crosses of honour inscribed “To all those who laid down their lives for their country – everlasting glory!” The sarcophagus was flanked by bas-reliefs on both sides: on one side there was a weeping willow, the symbol of sorrow and on the other – two women bowed down by their suffering. But this monument was not to survive long. During the Allied bombing raids of Sofia it was severely damaged. After the radical political changes – the communist coup on 9 September, 1944 the spot was “cleaned up” and the sculpture of the lion was moved twice. Later, minister of construction and roads General Ivan Vinarov gave orders that the lion be placed on top of a round plinth in front of the entrance to the former royal residence Vrana near Sofia. After that the lion mysteriously vanished and it was only in 1975 that it was found at a camping site near the residence by members of the public and was stored away at the National Museum of Military History.”

The question of constructing a monument to the unknown soldier all over again only came up in the 1970s. Dozens of competitions were organized, all kinds of projects were proposed but none were ultimately approved. Pencho Kubadinski, member of the Politburo of the Central Committee of the Bulgarian Communist Party suggested that the monument to the unknown soldier be constructed on the same spot but that its appearance be altered. The question arises - when was the monument restored as it now stands?

“In 1980 a team of architects headed by Nikola Nikolov and sculptor Prof. Lyuben Dimitrov was commissioned to do the job, as a matter of urgency. The monument was inaugurated with a lavish military ceremony on 22 September, 1981. The monument bears all the necessary markings – unpretentious but grand, bathed in the light of the eternal fire with laurel wreathes on both sides and an inscription – a stanza from Ivan Vazov’s poem “The new graveyard above Slivnitsa”.

What does the monument look like in our day:

“A sarcophagus with 15 cartridge casings containing soil from all corners of Bulgaria and the mortal remains of unknown soldiers from different historical sites. This is what makes the monument a symbol of honour, patriotism and the self-sacrifice of all Bulgarian soldiers. It is a symbol of the bond between generations, past and present. The sculptural composition includes the figure of the lion from the old monument. As time went by the Monument to the Unknown Soldier has come to embody Bulgarian statehood.” 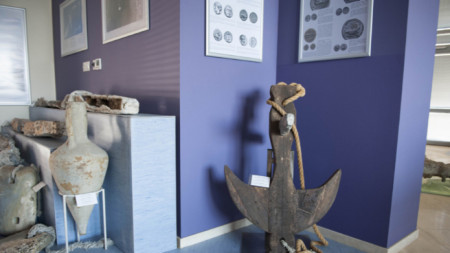 A new, extremely interesting artifact is now part of the collection of the Anchor Museum in Ahtopol. This is a Neolithic stone adze. The instrument was found in the Bay of Ahtopol. The valuable archeological artifact was found by diver..

On August 6, the Orthodox Church celebrates the Holy Transfiguration of our Lord Jesus Christ (Preobrazhenie Gospodne). In Bulgaria this is a very widely celebrated religious feast as many churches bear the name of this feast. Among..

1 May 1879 is the date on which the first Bulgarian postage stamp went into circulation, depicting a lion standing upright in profile with a crown on its head and the words “Bulgarian post”. But as, after the Bulgaria’s liberation..