The feet of Thracians, Greeks, Macedonians, Romans, Illyrians, Celts, and Egyptians walked along the marble slabs of the polis square. Streets branched towards temples, ateliers and shops, while the forum was the place to look for justice and to learn the latest news.

Heraclea Sintica- a cosmopolitan center for different tribes, ethnicities and peoples, reveals its ancient heritage on the territory of the municipality of Petrich near the village of Rupite and close to the extinct volcano of Kozhuh. Its lands were inhabited first by the Thracian tribe of Sintians (1300-1200 BC), who gave the name of the city. And when Macedon ruler Philip II conquered Sintica, he added Heraclea to the name, believing that his genealogy derived from the mythical hero Heracles.

“Heraclea Sintica is the best-preserved ancient polis in our region,” Sotir Ivanov, head of the Historical Museum in Petrich says. “The height of the walls of the civic basilica, the sanctuaries and shops located to the north of the forum is about five meters, and its architecture is similar to that of the ancient city of Philippi in Greece. The city has a special fate because it was a crossroads of cultures, political influences and economic relations during the days of the Sintians. It was also a connecting link between South and North, the Aegean coast and the interior of the Balkan Peninsula, Macedon and Thrace, and its population reached 40-50 thousand people. A characteristic feature of Heraclea Sintica is that it had a democratic form of government that continued to exist in later times.” According to the historian, the most important building in the ancient city was the civic basilica, which served as a court. It is almost entirely preserved and is the only such building in the Balkans. Just a hundred meters away from it, one can see the earliest Christian church in southwestern Bulgaria, dating back to the beginning of the fourth century.

Another valuable discovery is the sanctuary of ancient Greek goddess Nemesis. In it archeologists found broken tiles with the images of deities of the Roman pantheon, possibly broken by the hands of early Christians. On one of them, vice is represented as a blond young woman (in ancient times blond hair symbolized sin) with the foot of goddess of retribution Nemesis stepping on her.

“Heraclea Sintica was one of the largest ceramic production centers in this part of the Balkans,” Sotir Ivanov says.

“Stoneware production was also well-developed and six workshops have been discovered so far. Woodworking was popular due to nearby shipyards. In general, production of ceramics, glass, metals was enough for the prosperity of an ancient polis, not counting trade, which brought important revenue. It is also interesting that the city struck bronze coins with an inscription reading in Greek: ‘ Heracleans of Strymon valley.’”

The city surely existed from the 4th century BC until the sixth century AD, when it was last mentioned in tax records of Byzantine Emperor Justinian the Great. Unfortunately, the seismic area of ​​the Struma valley brought challenges to the polis but its residents managed to recover after a few devastating earthquakes.

And later, when invasions of Slavs and Proto-Bulgarians started, the territory came within the borders of the Bulgarian State. Today, Heraclea Sintica is part of the 100 National Tourist Sites of Bulgaria and is attracting more and more interest as one of the best preserved ancient cities.

In 2000 archaeologist Dr. Georgi Kitov and his team discovered, in the Roshava Chuka mound in the vicinity of Alexandrovo village near Haskovo, a Thracian tomb dated to the 4 th century BC. The high artistic value of the frescoes and the.. 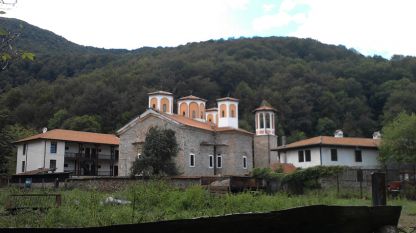 Etropole Monastery – a century of preserving culture and literature

In its centuries-old history, the Etropole Monastery "Holy Trinity", also called "Varovitets", has been preserving valuable pages decorated by skilled artists. Here hundreds of years ago, one of the most productive literary schools in Bulgarian..