Alpine climber Atanas Skatov on vicissitudes and choices in life 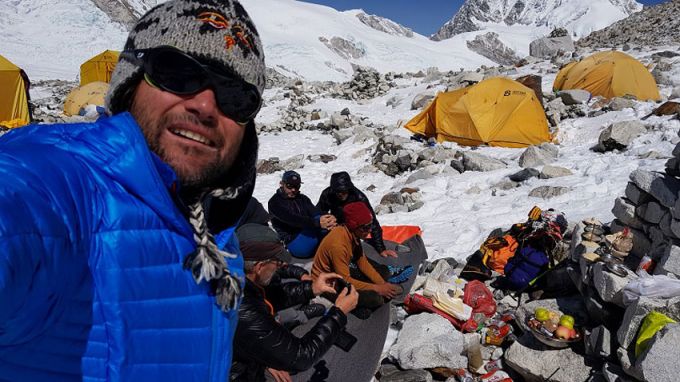 In 2017, following a solo climbing of the highest peak in North America, Denali (Alaska) Skatov became the first Bulgarian and the first vegan person in the world to have climbed the seven highest peaks of the seven continents. In 2014, he was the first vegan worldwide who climbed Everest (8848 m). In the course of six years of alpine climbing (2013−2018) Atanas Skatov has held 16 expeditions, climbed 13 peaks and this is both a national and global achievement. Today the conqueror of peaks admits that his interest and love for alpinism was hiding deep in him. He found out that it is great to have sport in the mountain after in 2011 he traveled for a second time the 700-km passage from Kom to Emine in the Balkan Range – the longest marked tourist route in Bulgaria. His latest achievement – the peak of Cho Oyu was his sixth in the project “Climbing of the 14 highest peaks on the planet without consumption of food of animal origin.”

“The expedition went on for more than 40 days. For the first time I climbed solo an eight-thousander without a Sherpa and without supplementary oxygen. It was hard because in the Cho Oyu it is always colder in the spring, and it was snowing almost every day.”

Atanas Skatov’s plans were to climb for the third time the world’s highest peak Everest after Cho Oyu. And although he is the first and only Bulgarian who has climbed it from both its northern and southern slopes, he believes that this time it was radically different because he went for solo climbing without supplementary oxygen. He admits it is an extreme strain to climb two peaks above 8000 m in the course of only one month but argues that it is possible even for normal humans. The Alpine climber describes in detail his experience day by day in a diary that he releases after that. In March the first book from the series “Above 8000 meters” was released – “Manaslu”, and in May, the second one “Annapurna, Dhaulagiri and Makalu” about his triple expedition in 2016. Coming up are books about his climbing of Gasherbrum (2016), Everest and Lhotse (2017) and Cho Oyu(2018).

Before indulging in the adventurous occupation of alpinism Atanas Skatov was a doctoral student in two chairs of Humboldt University – in vegetable gardening and phytomedicine. How easy was the choice between a career in science and alpinism?

“The two things are quite different. What I do now brings me a lot of pleasure. I make clear that there is nothing impossible and everyone has the power to make their dreams a reality. I am happy because people write to me that thanks to my example they have changed the