Bulgaria's national football team defeated Slovenia with a 2:1 as a guest at the Stožice Stadium in Ljubljana in the first match of C group of the newly-founded UEFA Nations League tournament. The hero for the "lions" became the striker of the Danish team Midtjylland, Bozhidar Kraev, who scored both hits for the team of Peter Hubchev. For the Slovenes at the end of the first half-time, the midfielder Miha Zajc scored a goal.

The next match for Bulgaria from the same group is on Sunday at the Vasil Levski national stadium in Sofia against the Norwegians, who defeated Cyprus with 2:0. 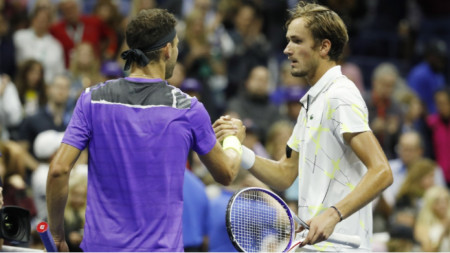 Bulgarian tennis player Grigor Dimitrov and Russian Daniil Medvedev were caught speeding by the police in Monaco, BNR reported, quoting local media. On the 20-kilometer section between Monaco and Nice, the maximum speed limit is 110 km / h, but Dimitrov..

Bulgaria’s promising swimmer Josif Miladinov swam the 100 m Butterfly event at the state junior swimming championship in 51.55 seconds. This is the..