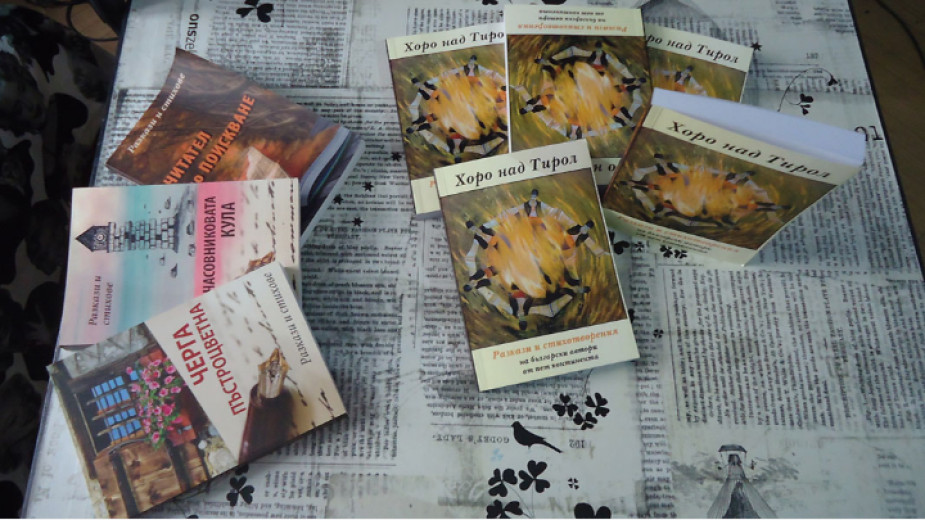 65 authors from fourteen countries and five continents present the colorful face of Bulgarian literature in this country and around the world. Their works, published on EuroChicago.com, are part of a collection entitled "Horo above Tyrol", which was published thanks to the support of Bulgarian emigrants.

After "The Colorful Rug", "The Clock Tower" and "Reader on Demand", the new collection includes the poems and stories of both renowned and little-known authors with various professions. “Along with beautiful poetry there are many good stories that present different styles in literature,” says poet Ivaylo Dimanov, who presented the collection in the press club of the Union of Bulgarian Journalists. “What unites these authors is the Bulgarian language. The focus is not necessarily on the presence of the emigrant theme, but on the contrary – half of the authors live in Bulgaria. But they and those who live far away from home, both share the feeling of love for the fatherland.”

Elena Peeva has been living in Thessaloniki for three decades and has several books and awards. In the collection she participates with two short stories, one of which is dedicated to writer William SArroyan. “The other story is called ‘Gender in Uniform’ and was provoked by the debates over the Istanbul Convention,” the writer says. "This story is real and it dates back to the times when I was a lawyer. A very good guy of Roma origin searching through the trash bins found the coat of a murdered prosecutor and then had hard times in jail, especially as he was also a person who could not adapt to society and sought answers to unresolved issues through the change of sexual orientation. One can be anything they like but through this story I prove that is that a convention does nothing – it can neither protect nor solve any problems.”

The life of Darina Schneider, whose father is a German and her mother is Bulgarian, has been divided between the two countries. The graduate pharmacist has one published book of poetry in German, while her second book, written in Bulgarian, will be released in the summer. “I have not paid much effort in learning the Bulgarian language. Even my mother has never taught me,” she says. "Each year I used to spend a lot of time with my grandparents and when I was twelve, I got my mother to show me the alphabet and so I started writing letters to them. Over time my language improved and in 2017 my poems came out in Bulgarian. I would like to continue because Bulgarian language is appealing to me and I find it more suitable for poems - perhaps because everything that is really important to me is in Bulgaria. The father of my children is a Bulgarian and when I step on this land I feel I am home.”

Regardless of genre and location, all authors somehow reflect on issues that mark our modern lives.

“The Bulgarian reality inspires and awakens nostalgic moods in writers' souls, but it also causes sadness, because those who live in Bulgaria have many reasons to be saddened for,” Ivaylo Dimanov says. “The topics in the collection are various but mostly focus on the Bulgarian spirit and are also a quiet rebellion against urbanization, globalization, lack of rules. And I think the shadow of our corrupt reality is threatening us a hanging sword, so the authors are not so happy as to shout ‘O Sole Mio’”.