Bulgaria's President Rumen Radev has imposed a partial veto on the State of Emergency measures bill which was passed in parliament on Friday. The reason is that the law requires emergency measures against the coronavirus outbreak which Radev regards as inadequate. "Bulgarians do not need threats but support", the Bulgarian head of state firmly said in a special televised address to the nation today.

The Bulgarian head of state calls for taking convincing measures by using protective mechanisms and assist those who are most affected by the crisis but not to restrict businesses. No battle has ever been won with fear, he stated. A total blockade will only exacerbate the crisis. There is no definition of false information. Self-censorship and restriction on freedom of expression are now being enforced, he continued. Restrictions will remain in force after the state of emergency is over. The Bulgarian army is entrusted with law-enforcing functions beyond its constitutional authority. The law is overgrown with unnecessary clauses, the president also stated.
The detailed motives for the veto are to be published in the shortest time possible, the President said.
Listen to the daily news from Bulgaria presented in "Bulgaria Today" podcast, available in Spotify.
Radio Bulgaria News Up-to-date information    coronavirus emergency measures President Rumen Radev state of emergency

Cave near Svoge is the longest in Bulgaria, experts claim

Kolkina Dupka is the longest cave in Bulgaria with 19,164 meters of underground galleries. Until now, Duhlata in Vitosha mountain with 18,200 meters of galleries was considered the longest in the country. This is what speleologists.. 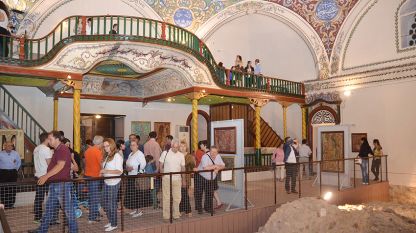 A forum on "Pilgrimage tourism in Bulgaria - prospects for development" will be held today in Stara Zagora. The emphasis will be placed on attracting tourists to the unique Museum of Religions in Stara Zagora, which displays preserved local..