The protesting Armenians told the Bulgarian National Radio that after 11 days of fighting, attacks on civilians, bombed churches, broken houses and numerous civilian casualties, it is right for the world to keep its word and recognize the independence of Nagorno-Karabakh.
Listen to the daily news from Bulgaria presented in "Bulgaria Today" podcast, available in Spotify.
Radio Bulgaria News    Armenians Azerbaijan Azerbaijani embassy Nagorno-Karabakh 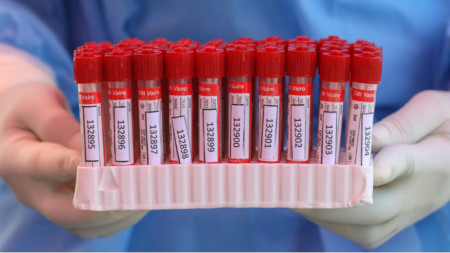 185 new cases of Covid-19 have been confirmed in Bulgaria in the past 24 hours out of 3,125 tests performed . The positivity rate stands at 6%, Single Coronavirus Information Portal data show. 62% of the new Covid-19 cases are among the unvaccinated...

On December 3, at an official ceremony in the National Palace of Culture in Sofia, the Bulgarian capital city will be presented with the flag of the World Capital of Sport 2024. The initiative belongs to the Association of..