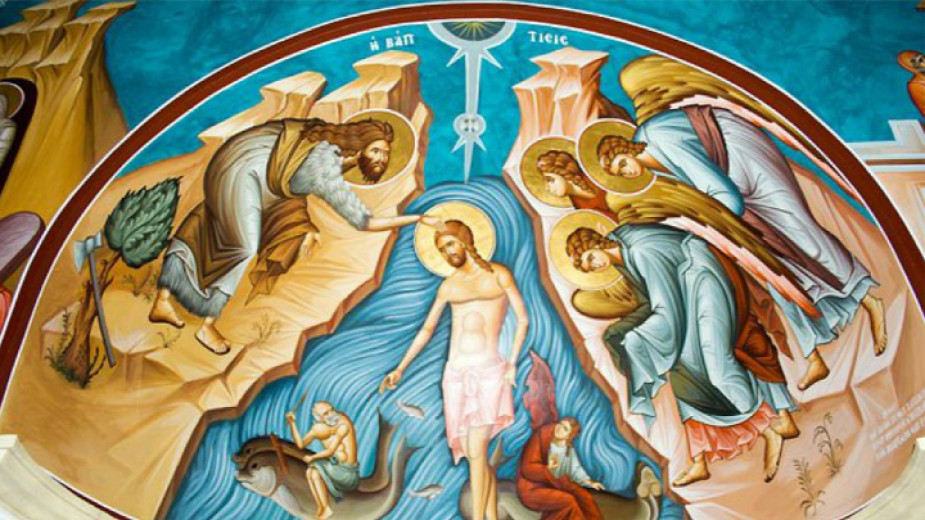 A great feast of the Lord, celebrated since the 2nd century AD, until the 4th century the church celebrated it together with the Nativity of Christ, and the common holiday was called Epiphany. Later, it becamse customary to celebrate Christmas on December 25th and the Baptism of Christ or Epiphany on January 6th.

One of the oldest church and folklore holidays, it has several names in Bulgaria.The name Yordanovden (Day of Jordan) comes from the name of sacred river Jordan in which John the Baptist baptized Christ and thus fulfilled the prophecy. According to the Gospel of Matthew, when the Son of God came out of the water, the heavens opened and the Spirit of God, taking the form of a dove, descended upon him. A voice was heard from heaven: "You are My Son, the Beloved, in You I am well pleased." Thus God appeared before the people in His trinity.

The idea of ​​consecrating water, the belief in its purifying and renewing powers gathers the Christian and folklore beliefs in the most important moment of the holiday - throwing the cross into a river, lake, etc. It is believed that after this ritual the water is consecrated, and whoever relclaims the cross will be healthy and lucky all year round. Therefore, when the priest throws the cross, men of different ages jump into the icy water. Of course, there is only one winner. He returns the cross to the priest and receives his blessing. Very popular in recent years has become the tradition of throwing the cross in the town of Kalofer located at the foot of the Balkan Range. On January 6, the so-called “male” chain dance takes places in the cold waters of the Tundzha River flowing through the town, all to the sound of drums and bagpipes.

The tradition was kept this year as well, despite preliminary announcements that the dance would be canceled due to anti-epidemic measures. The church's cross-throwing ritual will take place throughout the country as restrictions on the gathering of large number of people will be kept.

On the eve of Yordanovden is the last thurified dinner. As on St. Ignatius and Christmas Eve, it is composed on only meatless dishes. The table on which bread, wine, beans, walnuts, millet are placed is thurified with incense. According to the belief, at midnight before the Epiphany, the skies open and everything lights up, the animals start speaking in human voices, and we can wish for something. If a person is righteous – his or her wish will come true. This is the first in a series of holidays on which water purification is performed. That is why it is also called Voditsi or Male Voditsi (Waters or Male Waters in Bulgarian). On January 7 comes the holiday of Zhenski Voditsi (Female Waters) and Ivanovden (Day of Saint John the Baptist), etc.

Epiphany is also the end of the so-called Dirty or Bad Days, a dangerous period from Christmas to Yordanovden, in which dark forces act. A number of prohibitions observed during these days are also lifted.

On 20 January the Bulgarian Orthodox Church celebrates the Day of Bulgarian Patriarch St. Euthymius of Turnovo, one of the most prominent 14 th..