The forward of Lokomotiv Plovdiv and the Bulgarian national football team Dimitar Iliev received Footballer of the Year Award in Bulgaria for the second time in a row. The 32-year-old Iliev triumphed with 158 points. Valentin Antov from CSKA-Sofia and Anton Nedyalkov from Ludogorets placed after him.

95 sports journalists from 37 media outlets voted in the 60th edition of the "Footballer of the Year" poll. The Bulgarian Association of Sports Journalists and the Bulgarian Football Union are among the organizers of the poll. Traditionally, the big winner of the competition must give children as many balls as the number of sports journalists who took part in the voting. Evdokiya Popadinova has been recognized as the best in women's football for the fourth consecutive year. The award ceremony continues. 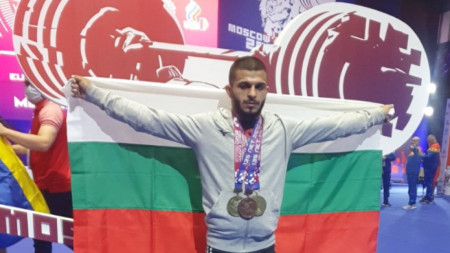 Angel Rusev won the gold medal at the European men’s and women’s weightlifting championship in Moscow in the 55 kg. weight categiory.  19-year old Angel Rusev comes from the famed weightlifting school in Ruse with coaches Krustina and Tadoslav..

The best Bulgarian female tennis player Tsvetana Pironkova will start participation directly in the main scheme of the tournament on green clay in Charleston, USA next week. The tournament is part of the WTA 500 series. Pironkova..

The star of Bulgarian football, Hristo Stoichkov, leads with a significant lead in an online poll for the greatest player in the history of FC Barcelona , the website Sportal reported.  The Bulgarian football legend is a convincing leader, leaving..