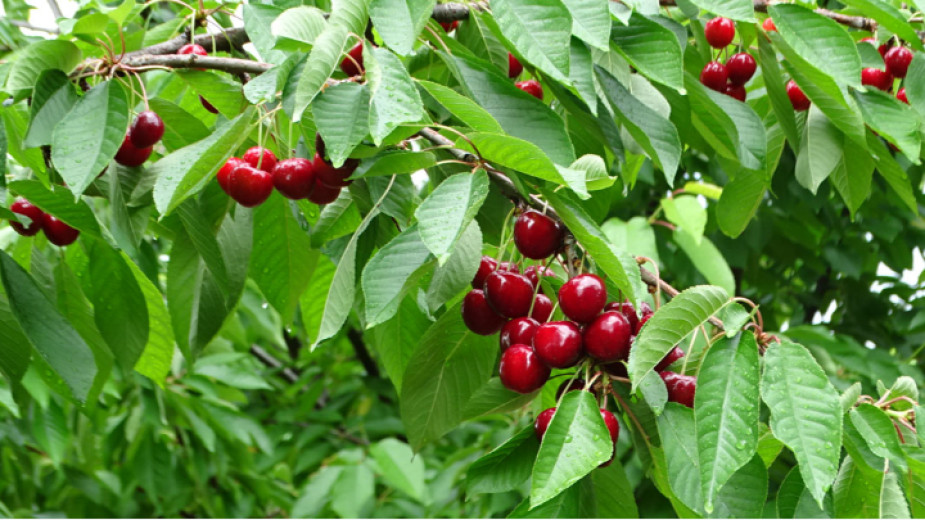 The season of cherries in the region of Kyustendil has already started. This Bulgarian region has gained reputation as the cherry orchard of this country. The harvest campaign is expected to continue until mid-July. There are hundreds of people working in the orchards and the campaign is guarded around the clock by the police. In the region of Kyustendil there are more than 60 points where harvest is purchased. In the nearby towns of Dupnitsa and Bobovdol and the surrounding area, there are more than 200 purchase points. This year's quantity is said to be average and below average. Due to the cold weather in April, the early varieties froze and the others would not provide high yields. Estimated purchase price per kilogram of picked cherries is 40 euro cents.

The cherry orchards in the Kyustendil region cover a total area of about 20,000 decares and about 5,000-6,000 tons of fruit are harvested seasonally. Municipal councilor and head of an agricultural cooperative, Valeri Yovev has told us more about this year’s cherry season:

"The harvest is not very good. There were frosts and there has been a decline in number of bee colonies. 10-15 years ago, when you entered a blossoming cherry orchard, you would hear the buzzing of bees but now there is silence."

The doyen of local fruit growing, agronomist Kiril Dimitrov, who can be found in his 200-decare cherry orchard around the clock, also describes the situation as a difficult one:

"For me, the harvest is just below average. At the backdrop of these low purchase prices we are gradually starting to give up on cherry growing, although the cherries in Kyustendil region are of the best quality in the country. The low price is killing us." Every year producers suspect there is presence of a cartel in the purchase and sale campaign of Kyustendil cherries:

"The cartel has existed for a long time but no measures are taken by the state. This could destroy fruit growing in the coming years,” Kiril Dimitrov tells a BNR reporter and adds that Italian companies buy the produce at low prices. Cherry growers also face the problem of workforce shortage:

"Many pickers have found work abroad and those who have stayed want higher remuneration. If we pay 25 cents for labor and the Italian buyer gives us 30 cents per kilo, why we should we do it? Last year I left 30 tons of cherries unharvested and this year the situation would probably be the same.”

The Covid pandemic and the fact that it is difficult to travel is also a problem, Borislav Gogev says. He is the head of a cooperative and in previous years he used to export his produce, but now this cannot happen:

"I exported to Mount Athos and to Cyprus. I transported the cherries to Sofia where they bought cherries from all over the country and every Friday a truck left for Limassol. These things are gone now.”

Cherry growing can be profitable even in times of low harvest and at these low prices, mayor of one of the villages near Kyustendil, Plamen Iliev says and adds:

"We can't leave cherries unharvested. People in the region need to have some incomes."

The Bulgarian National Bank, BNB, has increased its reserves by over 1 billion euro. This took place after the increase of the special drawing rights allocated by the International Monetary Fund, BNB has announced. With the increase, as..

Sofia absorbs almost one third of EU funds for the country

Bulgaria has used over 7 billion euros from the EU budget. T his has been the total amount of money under the various EU funds since Bulgaria joined the community. Dobrich, Svilengrad, Kostinbrod, Primorsko, Byala and Sozopol.. Bulgarian exports have gone up by 20% over past 5 years

The Bulgarian National Bank, BNB, has increased its reserves by over 1 billion euro. This took place after the increase of the special..