Bulgarians abroad are hoping to see better communication with the state 135 is the number of polling stations that will be established for the 11 July elections in the UK of Great Britain and Northern Ireland. After the restriction of having no more than 35 polling places in non-EU counties was done away with, Great Britain will be the place with the highest number of addresses where our compatriots will be able to exercise their right to vote at the upcoming snap elections in July.

“People in Britain are eagerly looking forward to 11 July, we want to vote, we want to see a change in Bulgaria and the people taking part in the organization of the elections like us will do everything we can to enable each and every Bulgarian to go to the polls,” says Svetlana Kaneva, secretary of a section election commission in Luton.

The fact there are so many polling stations gives hope that the long lines of people waiting to cast their vote, which engendered so much tension during the 4 April election, will not be repeated. But it also raises unanswered questions and difficulties for the people directly engaged in organizing the voting. In a special letter to the Central Election Commission representatives of 4 section commissions in the UK are demanding that the financing for consumables and supplies take place ahead of the election and within a reasonable period of time. They also write that “they are unable and do not have the capacity to travel to London to receive the documents and return the equipment and the election papers to the embassy after the 11 July elections are over”. For the purpose they are proposing that the papers be dispatched by courier to the addresses of the representatives of the state at each commission. The organization of the elections is often in the hands of people with no experience and that is one more thing to worry about.

“There are many volunteers here taking part in the organization of the elections who have never done this before, to them it is something entirely new,” says Stanimir Stanchev who represents the section commission in Hemel Hempstead.

“I get the feeling we are somehow neglected, ignored. It is not clear who this responsibility lies with. We realize that to organize the work of 135 polling stations we need the help of a lot of volunteers, and we are very eager to take part in the elections but on the other hand there is the question: are the people whose job it is to help us doing what they are required to do by law?”

Bulgarians in Britain say that our compatriots in other countries have the same kinds of experience and face the same kind of problems as they do.

“The trouble is that the embassies and the Central Election Commission have not been understanding, they have been delaying the answers to our questions, and when we do get answers they come as a telephone call which does not carry the same weight as a written document,” explains Svetlana Kaneva. “We are having a lot of trouble submitting election papers after election day is over. This time we are insisting that they come to us and pick up the election papers from us on the spot. Another problem is the consumable materials. There is one more thing – we do not know what kind of budget we are going to be given for personal protective equipment, we are volunteers and we do not have much money. We have raises this question but have got no answer.”

“We are giving of our time so the elections can be fair and transparent. We are all hoping to see a change in Bulgaria, a better future,” says Antonina Delcheva, another Bulgarian living in Great Britain, and adds that their requirements are minimal but that they are important. “So far there has been no understanding or assistance from our embassy, or from the Central Election Commission. There is still time for them to hear what we are saying and to take our questions into consideration so the elections can go ahead smoothly. But even if they don’t we shall still do our job before and during election day with the sense of responsibility required.” Dimo Karakehayov: The tradition of tahini-making in Bulgaria passed down through generations

Dimo Karakehayov from the town of Ivaylovgrad (southern Bulgaria) is а third-generation tahini maker The 33-year-old entrepreneur talks to Radio Bulgaria about why Ivaylovgrad is the only region in the country where sesame seeds.. 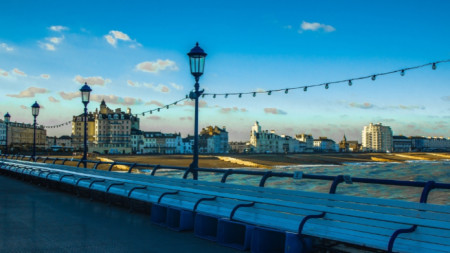 How has the city of Varna developed over the last 100 years from a cultural, educational and tourist point of view? Residents and guests of the English city of Eastbourne, host of the exhibition "Sea, Heart, Sky", will have the opportunity to..