Inexperienced people get into politics, which is not necessarily a good thing

The parliamentary support for Plamen Nikolov’s cabinet proposed by “There is Such a People” party (ITN) is becoming more and more uncertain. On one hand, the smallest Parliamentary group of “Stand up.BG! We are Coming” has already refused to vote in favor of ITN’s prospective cabinet. On the other hand, the Bulgarian Socialist Party called on ITN to withdraw Petar Iliev’s nomination for Deputy Premier and Minister of Interior. It is not the first time the personality of the Honorary Consul of Barbados in Bulgaria becomes a bone of contention between “There is Such a People” party and the political forces which have been holding talks with ITN on the formation of a cabinet. Petar Iliev’s interview for a national TV channel added fuel to the fire, because of his unacceptable behavior, tone of voice and attitude.

It is quite difficult to make a detailed and serious analysis of the composition of the prospective cabinet, because of the lack of experience of its members, contends political scientist Ognyan Minchev:

“Apparently we are talking about new people who are yet to enter this country’s political life. The lack of political experience is a coin with two sides. On one hand, such people do not wear the burden of previous governments. On the other hand, they do not have the necessary experience and knowledge to govern adequately. In career development, including politics, you need to go through all levels, gain experience and then reach certain peaks and make a successful career.”

It is worrying that Slavi Trifonov’s party has so far demonstrated a behavior, which aims to recycle the strongarm model of governance, said Valeri Stefanov, Professor of History and Bulgarian Literature.

“It is important to realize that this is about governing a country which is in a heavy collapse in many aspects- noted Professor Stefanov. - That is why it is very important to choose the right people”.

In Valeri Stefanov’s view, the government cannot be entrusted to people who are afraid to work or lack the necessary competence:

“Our nation is in decline and in real depression and value disorientation. It is ready to follow bogus saviors- contends Professor Stefanov. - The political parties will always scramble and offer some conjunctures. The problem is that the sovereign cannot do its job properly and identifies itself with profiles such as the one of the former Prime Minister, or the political party that won the early elections. I call this a value failure, because the society cannot nominate leaders who can guarantee some historical perspective. ”

The proposed cabinet will be put to the vote in the National Assembly on August 11 (Wednesday). The prospective cabinet proposed by ITN party is likely to remain prospective, judging by the statements of the political leaders, sociologist Yuriy Aslanov forecasted in an interview for the Bulgarian National Radio. “On the other hand, the provocative actions of ITN do not in any way provoke negative reactions from voters. The people who take part in public opinion polls tell us that they do not want more elections and that it is high time that all possible steps are taken to form a government”, noted Yuriy Aslanov. In his words, Bulgarians think that the political system in this country has stopped working in their favor a long time ago and that people show great mistrust in this system.”

Compiled by: Yoan Kolev (based on interviews by Horizont channel, BNR) 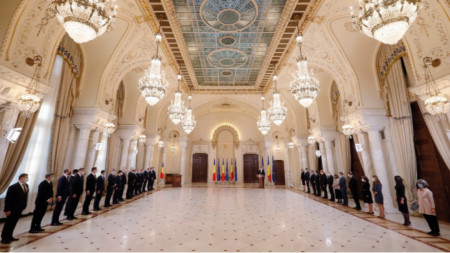 What does voters’ reluctance to go to the polls at the presidential runoff tell us?

The 4 th election day for 2021 registered an extremely low voter turnout in the country, barely clearing 30% (30.3%). Rumen Radev, who, according to inconclusive results wins the presidential election, commented the low motivation of the voters,..

The first sitting of the new 47 th National Assembly of Bulgaria will be held on December 3, the press service of the Bulgarian head of state..