Bulgaria's athletes Georgi Stoyanov and Vladimir Kotochev brought the first European title in youth acrobatics for Bulgaria. They won in the youth doubles category age 11-17 at the Junior Championship, which is being held in the Italian city of Pesaro.

The athletes of the Burgas-based Club for Sports Acrobatics performed perfectly their combination, set to music by Michael Jackson and collected the highest marks - 27.650 points. They were followed by the representatives of Russia with 26,900 points and Great Britain - 26,800 points.
Radio Bulgaria Sport    acrobatics acrobats Pesaro

The rejuvenated Bulgarian national football team finished their friendly away match versus Ukraine in a 1-1 draw. In Odessa, the more experienced Ukrainian side dominated practically the entire match. After numerous misses by the Ukrainians,.. 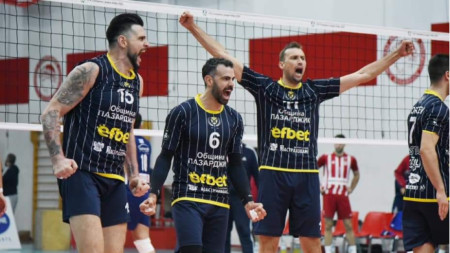 Hebar qualifies for the group stage of CEV Champions League

A Bulgarian volleyball team will participate at the group stage of the CEV Champions League for the first time since 2016. Bulgaria’s volleyball champion Hebar (Pazardzhik) defeated 3:1 Olympiacos Piraeus in a home match of the third round of the..

Velichka Nedyalkova from Bulgaria has received the prestigious award of the International Olympic Committee for “overall merit”.  The Golden Rings prizes are awarded for best coverage of the Tokyo Olympics. She is the only holder of an “overall..