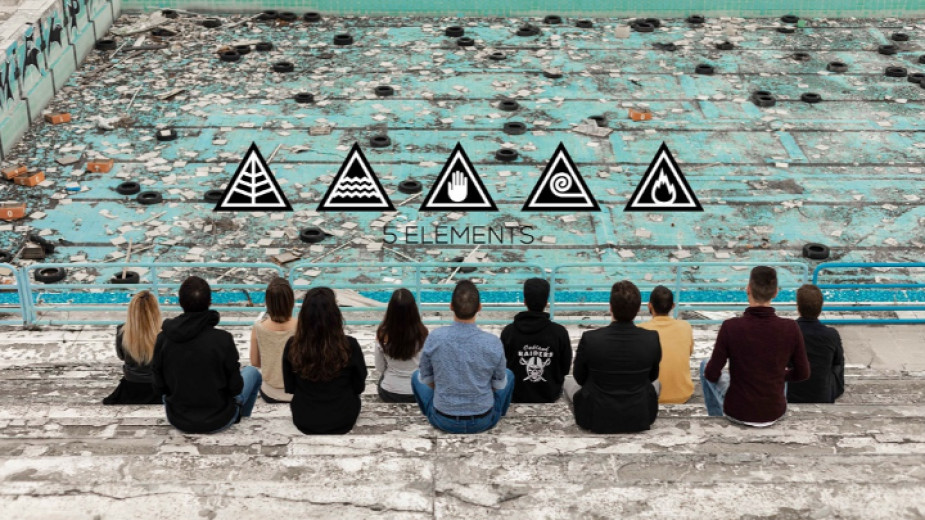 Is it possible that music performed by eight violins, three violas, three violoncellos and one double bass, which form a chamber string orchestra, can oppose the perilous attitude of man towards nature?

Yes, it is! The musicians from the independent formation Drop Down Community respond with determination. They are all award-winners and have been part of well-known musical groups but what fascinates them about their new project is not the spotlight, but rather the honorable cause of universal significance. With their innate subtlety, the young artists cannot remain indifferent to the numerous environmental problems around them. This is how the idea was born to offer practical solutions to deal with the imminent environmental pandemic through the medium of music.

The new audio-visual project “5 Elements” of Drop Down Community impresses with its powerful youthful energy, which comes to transform the status quo. Which are the five elements that the musicians turn our attention to?

Air, fire, water, earth – the four elements that are inextricably linked and to whose destructive force the artists have added a fifth element – man and his deeds.

The composer Ivo Paunov has dedicated to them five short musical compositions titled “Five Elements”. The music conjures up the feeling of dramatic intensity and complements with finesse the inspiring images of Bulgarian landscapes. The orchestra’s energy transcends the boundaries of the concert hall. We see the musicians atop a helicopter pad on the roof of a huge skyscraper. The next images show a “concert” on the ashes of a burned forest. The music’s dramatic suspense intensifies in the last “concert” filmed amidst mountains of plastic waste. It is quite obvious how much man has done to destroy nature. But art brings hope and the musicians offer us a breath of fresh air with the magnificent images of Bulgarian green forests.

This is the image-music project with an ecological perspective in a nutshell. It premiered to the public on 14 November in the Sofia-based Bulgaria Concert Hall. When will we meet the music formation again? We do not know, but more importantly, the musicians have breathed life into their powerful message. The Bulgarian schools will be the first to embrace it, where children will listen to music and talk about their duty to the planet.

The musician Alex Atanasov is at the heart of the project which brought to life Drop Down Community. The 26-year-old man says that the idea was born in 2020 when the country was in a lockdown and musicians were faced with the challenge to express their art in new ways:

“Every member of the orchestra was an actively engaged citizen so we decided to turn our attention to the ecological catastrophe we are all facing. Then all the pieces somehow came together. We launched a video clip and made a short film on an environmental topic. We subsequently built up on this idea and are now turning it into our educational project. We are setting off with a lot of hope, because some young people approached me after the concert and at least half of them told me they made the decision to change something about their lives in order to protect nature. This is a very encouraging result and I hope that the project will continue to flourish and reach many more people.” The violinist Kristina Hinova is one of the 14 musicians from Drop Down Community.

“There is nothing more fulfilling than performing side by side with your closest people. The Five Elements project brought me immense joy because all of us at the orchestra are politically involved, responsible citizens, but only art can truly unite us and have a powerful impact on the audience,” Kristina believes. At the height of summer, let us take a look at the national road network, though not the thoroughfares leading to the seaside resorts in the environs of Varna but at the region of the town of Vidin. Once the capital of the Tsardom (Kingdom) of..