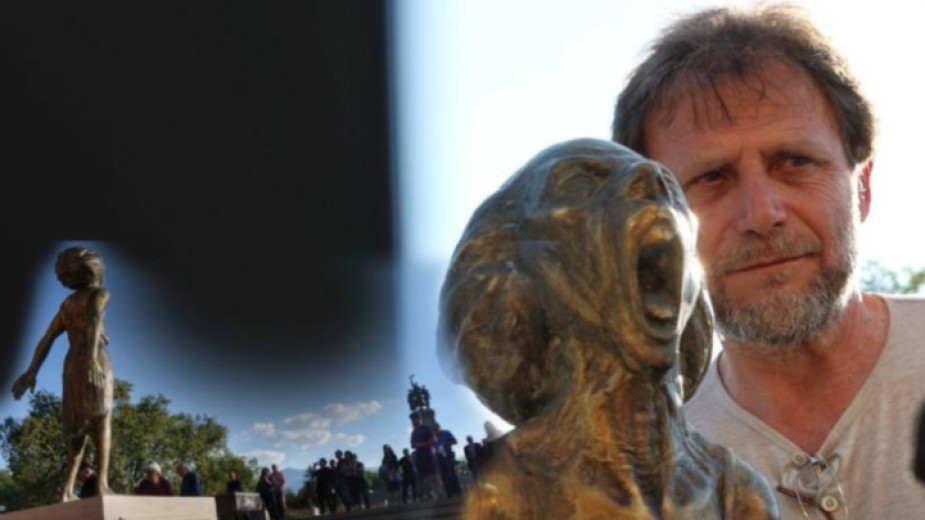 The sculpture "The Cry of the Ukrainian Mother" was erected in the Prince's Garden in Sofia against the disputed Monument to the Soviet Army. Intellectuals, artists and citizens came to the event.

The sculpture provoked violent reactions on social networks. Even supporters of Ukraine commented negatively on the aesthetics of the sculpture. But fans of the work, which contrasts sharply with the spirit of socialist realism in which the Soviet Army Monument is held, compare the image to Munch's The Scream and Picasso's Guernica.
"I expect both positive and negative reactions. It is not beautiful, but neither is the truth," the sculptor Nedelcho Kostadinov commented to BTA.
"The cry of the Ukrainian mother" remained on the pedestal for less than two hours.
Listen to the daily news from Bulgaria presented in "Bulgaria Today" podcast, available in Spotify.
Radio Bulgaria Culture    Nedelcho Kostadinov sculpture Ukrainian mother Only in the port of Burgas life fills me with admiration! Thus Bulgarian poet Hristo Fotev began his poem Port (1969). He was one of the most inspiring poets of recent Bulgarian history and an emblematic personality of his native Burgas. Together.. The National Palace of Culture - the pulsating heart of Sofia

The National Palace of Culture (NDK), located in the heart of the capital Sofia, is the largest and most prestigious congress centre in Bulgaria. In the 1980s it was a model of a new era in the cultural industry. But there is much more to it. In four..

Writer Georgi Gospodinov presented in Burgas one of his less known works entitled “The Cracks of the Canon”. It is divided into two parts. The first one..