The Council of Ministers have approved the position of Bulgaria on the offer of the French Presidency of the Council of EU for a common position of the European Union when it comes to the start of negotiations with the Republic of North Macedonia. It corresponds to the decision of the National Assembly, according to which Bulgaria would lift the veto, provided that Skopje complied with Sofia's demands. A bilateral protocol between Bulgaria and North Macedonia is yet to be signed, the government's press service said. Kherson is being evacuated

The Ukrainian authorities began to evacuate the remaining residents of Kherson after the withdrawal of Russian troops, BTA informed. The city has come back under the control of Kyiv, after months of Russian occupation. Kherson's..

There were 183 new Covid-19 cases in the past day. According to official data, 5.46% of 3,351 tests were positive. There are 464 hospitalized patients as 54 of them are in intensive care. 48 new patients were hospitalized and five.. 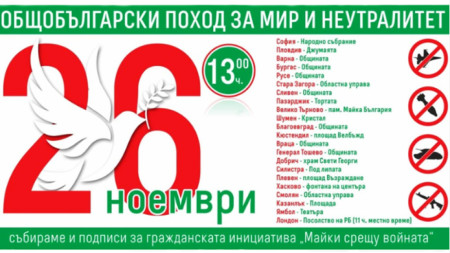 All-Bulgarian March for Peace and Neutrality will be held on Saturday in more than 20 cities across the country , including Sofia, Plovdiv, Varna, Burgas, Ruse and others. According to the organizers, this is a purely citizens' initiative aimed at..

Deputy Minister of Agriculture: The state should support the participation of Bulgarian producers in international exhibitions

"Many farmers are unable to make available the necessary resources to promote their products. That is why the state needs to support their participation..

A tank truck carrying used motor oil exploded in the town of Ruse and claimed the life of one person, the BTA reported. Police received a call about..