Only in the port of Burgas

life fills me with admiration!

Thus Bulgarian poet Hristo Fotev began his poem Port (1969). He was one of the most inspiring poets of recent Bulgarian history and an emblematic personality of his native Burgas. Together with a number of writers, intellectuals and artists, he was part of the Burgas bohemian circles, for which at the end of the 20th century the Black Sea port city became known as "the city of poets, artists, actors and musicians".The magic of this Burgas bohemian rhapsody took place in certain establishments, which were their "creative laboratories" where they could freely discuss their innovative ideas, beyond clichés and social norms, journalist Mariana Parvanova tells Radio Bulgaria. For years she has been collecting bits and pieces of history from that time through the stories of participants and witnesses. The result of her work is the book "Bohemian Places of Burgas during Socialism".

"In the 1950s to the 1980s Burgas was not a very big city. And yet, based on people's stories and written testimonies, I counted about 20 iconic restaurants, of which about six are still open today, like the "Sea Casino", the "Primoretz" Hotel, the "Zlatna kotva" (Golden Anchor) Restaurant, famous for its sea delicacies, the "Roza" (Roze)Pastry Shop.

Unfortunately, there are almost no written accounts of what life was like in these places. It was a parallel life, where one could talk more freely and share one’s brilliant unconventional ideas. This part of Bulgaria's cultural life at that time unfortunately did not make it into the press. The stories exist only in the memories of some of the people who were direct witnesses and participants of these events and their accounts are my main sources of information."

The wide open sea and the port of Burgas, the largest port in Bulgaria, prove to be a passable barrier to the European spirit and world ideas. "The cultural life of Europe quickly reaches Burgas through the ships, the voyages of the sailors and the intellectuals", says Mariana Parvanova. Another factor is the city's ethnically diverse population, including a large Armenian and Greek colony.

"During socialism Burgas was a place where you could buy, for example, music by The Beatles, modern rock. And only later did this forbidden music go inland."

This free contact with the outside world turned out to be especially important for the artists who were the core of any Bohemian community. They had information about the new art movements and artists and were very much influenced by them, the journalist explains.

And despite the standards of so-called Socialist Realism that were imposed in these years, they managed to break new ground in art. This busy life outside the home shows how vibrant and united the city was - fertile ground for the emergence of an open and ready to embrace novelty audience, admits Mariana Parvanova. In support of her words, the journalist reminds us of the proverbial quartet of theatre directors who had all started working at the Burgas State Theatre "Adriana Budevska" in 1957.

Thanks to the fledgling theatre directors Venelin (Vili) Tsankov, Metodi Andonov, Yulia Ognyanova and Leon Daniel, for the first time in Bulgaria the Burgas theatre dared to stage a play by the German playwright Bertolt Brecht, something unheard of before. "Architecturally, Burgas has preserved to some extent its appearance from that time, but I think it has lost some of its artistic charm and uniqueness. However, I believe that today everyone who comes to the city feels the friendly and intimate atmosphere which everyone has been talking about since the middle of the last century. And this is the big difference of Burgas from Varna, which is a much harsher, much more austere, more formal, if I can call it that, city.

And this spirit of Burgas, which has been preserved to this day, is the precious thing about this city." "Art is a lie, but this lie teaches us how to get to the truth" - these words of the great Picasso seem to be the universal translation of the efforts of all artists around the world. The search for the "truth" for a better world, for the.. 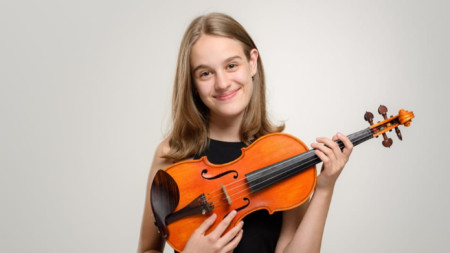 14-year-old Diana Chausheva is the big winner of the "Concertino Prague" competition. BNR is the producer of the competition recordings of the young Bulgarian violinist. The competition is for musicians up to 18 years of age and is..

The first exhibition of its kind "The Light of the Letters" will be launched on September 22 in Vancouver, British Columbia, Canada. The date of the opening was chosen to coincide with Bulgarian Independence Day, which will be celebrated by both the..