Serbia is a regional military power According to the annual report of the US military website Global Firepower, Serbia has the largest military force in the Western Balkans. According to a total of 50 criteria, the Serbian army ranks 61st in power in the world and has growing capabilities. It is followed by Croatia - in 62nd position, Albania - in 115th place, Montenegro - in 132nd place and North Macedonia - in 135th place.

"The fact that Serbia is the largest military power in the region is evidence of a waste of taxpayers' money, who have bad hospitals, schools, low wages and pensions and generally live poorly. I would prefer Serbia to be economically the strongest in the region," commented Bojan Kostreš, general secretary of the League of Social Democrats in Vojvodina, to Danas newspaper. We are surrounded by NATO member countries, from which we have already lost one war, the politician recalls.

Romanian Health Minister Alexandru Rafila sparked panic by urging people under 40 to go "as soon as possible" to family doctors or pharmacies to get potassium iodide tablets. The spokesperson of the co-ruling National Liberal Party, Ionuț Stroe, criticized the socialist minister that the news was announced in a controversial manner, writes Adevarul. Stroe asked authorities to explain in what situations the pills should be administered and who can take them. Their purpose is only for people under 40 years of age and only after radiation in a nuclear accident, the Ministry of Health specified, quoted by AGERPRES. It is emphasized that preventive use of the tablets is contraindicated.

Tablets are dispensed in more than 2,500 pharmacies, the list of which is uploaded to the website of the ministry.

With a record investment of 2 billion dollars, Albania’s port of Durres will be renovated After 3 years of negotiations, the Eagle Hills Real Estate Development company from the United Arab Emirates signed a memorandum with the Albanian company Albanian Seaports Development Company for an investment of 2 billion dollars, ATA agency reports. The money is for the modernization of the port of Durres. Albania's Deputy Prime Minister and Minister of Infrastructure and Energy, Belinda Balluku, emphasized that the investment was the largest so far, not only in Albania, but also in the region.

The fishing port will be transformed into an entertainment area where restaurants and leisure facilities will be built. An elite yacht harbour will be built on the site of the old commercial port, as well as a new modern commercial terminal with a logistics hub.

In North Macedonia, they are dissatisfied with the names of the Bulgarian clubs Bulgarian clubs are springing up in North Macedonia like mushrooms. Now there is also a "Tsar Ferdinand" club in Bogdantsi, the Macedonian media write, quoting the local Bulgarian Viktor Stoyanov. The Jewish community in the country expressed displeasure that the authorities registered a Bulgarian association called "Tsar Boris III" in Ohrid a year ago. Macedonian Jews claim that Tsar Boris III is a "fascist", a "helper of Hitler" and responsible for the deportation of Jews from Thrace and Macedonia to Treblinka during World War II. On Facebook, from the Bulgarian association in Ohrid, Tome Blazeski emphasized that they are not neo-Nazis, have no ties to anti-Semitic movements and regret what happened to the Macedonian Jews during the war, but recalled that there are no records that Boris III was tried and convicted for his rule.

On August 20, Greece will exit the so-called enhanced surveillance framework, Finance Minister Christos Staikouras announced. The suspension of international supervision over Greek finances will allow Athens greater freedom in conducting economic policy. Greece remained under surveillance even after 2018, when it managed to get out of 3 international rescue programs for over 260 billion euros.

The money was allocated by the EU and the International Monetary Fund to deal with the country's bankruptcy and debt crisis in the period 2010-2015.

"After 12 years, a difficult chapter for our country is coming to an end. Greece is returning to the European normality and will no longer be an exception in the Eurozone," Staikouras said.

The fact that Athens has implemented most of the promised reforms and that it is exiting monitoring on August 20 was confirmed by a letter from the European Commission. 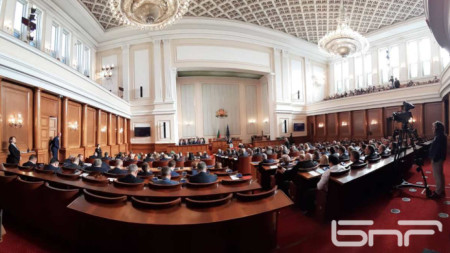 Bulgarian voters are pessimistic about the work of the new 48th National Assembly.  Parties, which are elected, are unable to reach a consensus - this showed a poll among the citizens of Burgas, made by BNR Burgas.  " What urgently needs to..

A solemn parliamentary sitting on October 19 will mark the beginning of the new 48 th National Assembly. The newly elected 240 deputies will take the oath in the historical building on the National Assembly Square in Sofia. ‎ The..

National Assembly Speaker Vejdi Rashidov is not optimistic about forming a cabinet because of the disagreements between the political forces. He said..