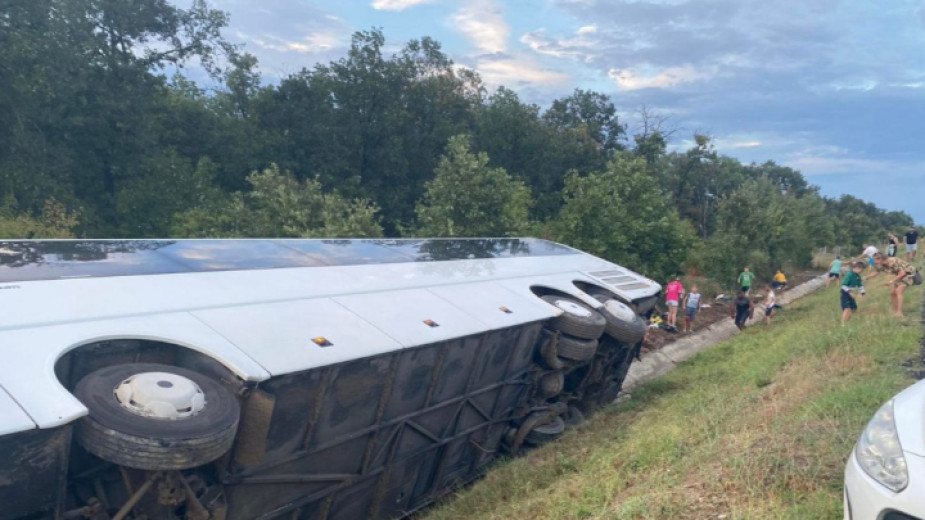 A bus with Serbian registration has overturned at kilometer 216 of Bulgaria's Trakia highway (A-1) in the direction of Sofia shortly after 8 pm this evening. 49 people - children and adults - were travelling in the bus.

The children are part of a folklore group which participated at a festival in the Black Sea resort of Sunny Beach. It has been reported that all passengers in the bus are from Belgrade.

There are no casualties and all injured passengers have been taken to the hospital in Stara Zagora. An elderly person is in a more serious condition, in which limb amputation may be necessary, Bulgaria's Ministry of the Interior announced.
"17 children have been brought to the hospital. The youngest is 6 years old, the oldest is 17 years old. Three of them have more severe bruises and abrasions, they are going for a scan to clarify the diagnosis. There is a man who may been amputation of a lower limb", the director of the Stara Zagora-based hospital "Prof. Dr. Stoyan Kirkovich", Dr. Yovcho Yovchov, told Radio Stara Zagora.
The reasons for the incident are being clarified. Traffic in the area remains difficult.
Listen to the daily news from Bulgaria presented in "Bulgaria Today" podcast, available in Spotify.
Radio Bulgaria News    accident bus crash Trakia highway

All textbooks in Bulgarian schools to become gratuitous

Textbooks will be free for all students from 1st to 12th grade , MPs unanimously decided today, while voting on amendments to the Preschool and School Education Act.  Currently, this measure applies only to children up to the seventh grade...