The black box of the Su-25 military aircraft that crashed yesterday afternoon at Bulgaria's Bezmer airbase has been found. This was announced today by the military district prosecutor, Colonel Hristo Tinev from the Sliven Military Prosecutor's Office.

It is expected that the pilot of the plane, Col. Peyo Donchev, who is undergoing treatment at the Sofia Military Academy, will be questioned. The airman's condition is stable, non-life-threatening.
The Military Prosecutor's Office has started questioning the officials involved in the incident, and the site of the incident is being re-examined.
The versions for the crash are a possible technical malfunction of the plane, a pilot error or other unforeseen circumstances.
It is also being clarified at what height the accident occurred, which is reported to have occurred during landing.
Listen to the daily news from Bulgaria presented in "Bulgaria Today" podcast, available in Spotify.
Radio Bulgaria News    Bezmer airbase military aircraft pilot Su-25

Deputy PM Pekanov: The introduction of the euro will reduce interest rates on loans

With the adoption of the euro, Bulgaria will raise its credit rating and this will lead to a decrease in interest rates on loans, Acting Deputy Prime Minister for the Management of European Funds Atanas Pekanov told Nova TV , stressing that we are.. 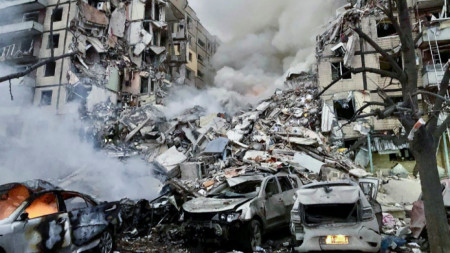 Europe is preparing the international tribunal for Russia's crimes against Ukraine

The European Union has information on 65,000 incidents in Ukraine that could turn out to be war crimes , European Commissioner for Justice Didier Reynders announced after the Justice and Home Affairs Council in Stockholm, which discussed the creation.. Over the past 24 hours, 60 cases of coronavirus have been identified in Bulgaria out of 2,577 tests performed , according to the data of the Unified Information Portal.  68% of the newly infected persons have not been vaccinated.  The highest number..