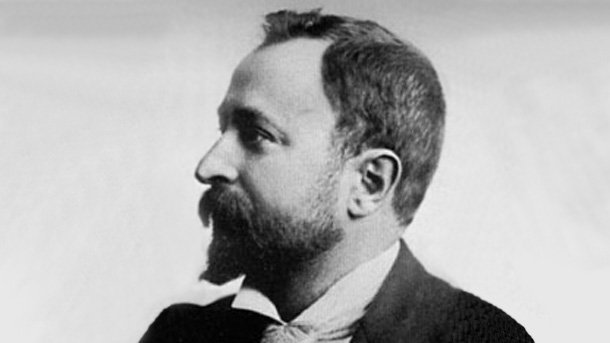 Aleko Konstantinov, widely recognized as one of Bulgaria’s greatest satirists, was born on 13 January 1863 in the Danube town of Svishtov. He wrote brilliant pamphlets and short stories imbued with a rare sensitivity to emerging political corruption in the first decades after Bulgaria’s liberation from five centuries of Ottoman rule in 1878. Aleko Konstantinov conceived the emblematic character of Bai Ganyo from the cycle of stories of the same name, a summary of an emerging breed of very active and unscrupulous modern Bulgarian businessmen-turned-politicians. Endowed with outstanding civil dignity, the writer used his unparalleled irony to point to some ugly aspects of modern life in Bulgaria, and to the transformation of dominant social values. In the meantime, however, Aleko Konstantinov was in love with Bulgarian nature and his legacy includes some literary gems describing some breathtaking local sights. He was the initiator of the first climbing campaign in Bulgaria. On 27 Aug 1895, 300 enthusiasts went out to climb Cherni Vruch (2290 m), the highest peak of Mount Vitosha outside the capital Sofia. In this way he laid the beginnings of organized tourism in this country. For more on the life and the tragic death of Aleko Konstantinov – the Lucky Man, a nickname he gave to himself, from the Director of the Museum-House of the writer in his native Svishotv, Ivelina Ivanova. His heart is kept at the museum off the River Danube. Aleko Konstantinov was born to the affluent Svishtov family of Ivanitsa Hadzhikonstantinov and Tinka Hadzhiivanova. It was a family of merchants and craftsmen, and his grandfather was one of the founders of the town’s community center.

“The father of the Lucky Man, Ivanitsa, was born in 1818”, Ivelina Ivanova explains. He was lucky to receive very good schooling in Galati, Romania, and spoke a few foreign tongues – Turkish, Romanian, Greek and Italian. Upon graduation he was employed at the trade offices run by one of the richest Bulgarian merchants in Romania, and a great patriot too, Evlogi Georgiev. Aleko’s father had great financial success and in 1861 returned to Svishtov. A year later he married 16-year-old Tinka Hadzhiivanova with whom he had four children, Aleko being the firstborn.”

For two years Aleko Konstantinov was trained in Svishtov, at the school led by Revival activist Hristaki Pavlovich, and was then sent to the celebrated Aprilov School in the town of Gabrovo, Central Northern Bulgaria. More from Ivelina Ivanova:

“Aleko returned to Svishtov where he celebrated the Liberation of Bulgaria and after that left for Russia. He graduated from college in the city of Nikolaev, and then studied law in Odessa. When he was back to Bulgaria, he started work at the Sofia Regional Court in 1885, a year quite tight with important events. The most important one of them was the unification of the Principality of Bulgaria and Eastern Rumelia, previously an autonomous province of the Ottoman Empire. In the wake of Unification Serbia declared war on Bulgaria on pretext that the balance in the Balkans had been broken. In the feuilleton Why taunt me, Todor, Aleko Konstantinov described his experience as a volunteer in the Serbo-Bulgarian War. On 4 January 1886 he was promoted to the position of prosecutor at the Sofia Regional Court. At that time his private life turned tragic. For only five years, from 1885 to 1890, he lost all his closest family members – his parents died, and then his sisters, so he was all alone in this world. He sold a few family estates, but bestowed his house of birth in Svishtov to be used a school."

To make things even worse for him, Aleko Konstantinov was dismissed from the Sofia Court on grounds that he had refused to lodge a lawsuit against People’s Rights Newspaper which had condemned PM Stefan Stambolov in an editorial. Aleko started a practice as a lawyer and gave some time to translation of fiction. In 1890 he was appointed member of the Sofia Court of Appeal. However, after a new minister of justice took over, Konstantinov was out of the job again. As a lawyer however, he refused to defend anybody whom he did not believe was innocent. In 1893, with financial support from friends, Aleko Konstantinov left for the world trade fair in Chicago. He went to see the Niagara Falls, Washington DC, New York, Boston, and visited many museums, parks and libraries. On his way back he made a stopover in London. Aleko Konstantinov was absolutely fascinated by the trip and it occurred to him he had to make a global tour.

When he returned to Bulgaria, he wrote the travel notes To Chicago and Back released in a separate volume in 1894. In it he draws up a fascinating parallel between life in the New World and in the Balkans. In 1895 the first edition of his masterpiece Bai Ganyo, a cycle of short stories, came out. In the character of Bai Ganyo Aleko Konstantinov satirizes the unscrupulousness, spiritual poverty and hypocrisy of an emerging stratum in Bulgarian society greedy for money and power. With dark humor, he told the story of how Bai Ganyo organized elections revealing the political habits and ways and the brutal political struggles of that time.

“Aleko Konstantinov was involved in political affairs. In 1894 parliamentary elections were held in Bulgaria. He ran for an MP but failed to get elected. In 1896 the Democratic Party was founded and Aleko Konstantinov was among its members. However, with his merciless criticism of the government he got into big trouble. Worried over his future, leading literary critic Dr Krastyo Krastev decided to advance him with cash and send him to Italy together with poet Kiril Hristov. The idea was to encourage Aleko Konstantinov to write another collection of travel notes. Despite his passion for travel, the writer refused, because he was engaged in a lawsuit in the City of Plovdiv, Southern Bulgaria. All this happened in May 1897. Aleko met with Mikhail Takev, also member of the Democratic Party and a lawyer in Plovidv.”

This feature contains excerpts from Aleko Konstantinov's travelogue "To Chicago and Back" written in 1893 when the writer travelled to the New World to visit the World Columbian Exposition in Chicago.
The English translation is of Robert Strum.