Transition via art and knowledge 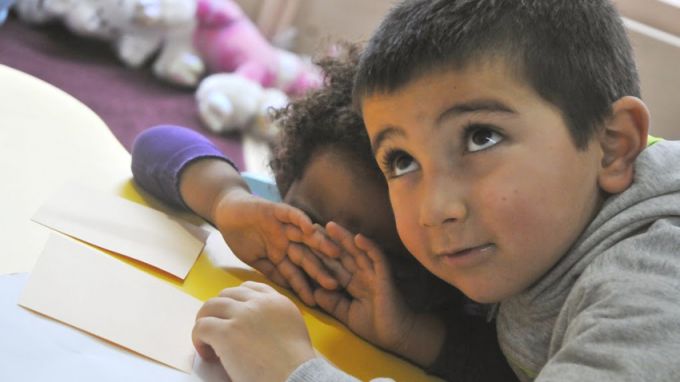 Sessions in fine and applied art, music lessons including playing instruments and singing, as well as dancing - these are only part of the activities under the project Transition via Art and Knowledge. It targets refugees in Bulgaria and seeks to facilitate their integration in society. The project is run by Mission Salvation Foundation and is financed under the programme in support of NGOs in Bulgaria of the European Economic Area Financial Mechanism 2009-2014.

Skepticism and mistrust on behalf of Bulgarian society; depression; family conflicts triggered by insecurity - these are some of the problems that refugees have to deal with, contends Ivodor Kovachev, founder of Mission Salvation. „Once we make them feel at home though in a foreign country they are no longer a threat to our society”, he argues. Various courses under the project are held at the Ovcha Kupel accommodation center and at the Palace of Happy People Culture & Information Center, both in Sofia. Angel Kovachev who became popular with his participation in the X Factor music show leads guitar lessons. What has motivated him to help refugees? „I think that there is always a step further to make - by extending a helping  hand to others and kindle hope in their hearts. The light of joy and gratitude in their eyes is my motivation. For this reason I accepted the invitation to join the project and I did so with enthusiasm. At first, I wondered how a young guy like me aged 22 would be able to communicate with someone coming from so far, with different beliefs and with a different culture and language. I thought it would be the challenge of challenges. Still, I took the challenge because I knew I could rely on the universal language of art. It knows no boundaries and unites people.”

To smooth the integration of refugees they are offered Bulgarian language courses for kids and adults, seminars about the labor market in this country and across Europe and are taught business and computer skills. Qualification courses in hotel housekeeping and sewing are also available. Special attention is given to psychological support organized in the format of family mutual aid groups. During sessions everybody is free to share their experience and hardships and to receive emotional support. Ivodor Kovachev says more about the target groups of the project:

„Our group comes from Iran and Afghanistan in the main. In all honesty refugees from Iran do not get a warm welcome. Why? Well, it could be that they have got no good reason to migrate because there is no war in that country. Almost every Iranian asylum seeker is turned down, unlike Syrians given the raging war in Syria. However we should have in mind that the regime in Iran is a threat to anybody who is free-thinking. It is not about innocuous persecution. There is a government policy there for rigorous imprisonment. So our target group also covers nationals of Iran, Afghanistan and Nigeria - married, single and children. They are very positive guys. I have become very fond of them! There is no way to do good to someone and not to feel encouraged to continue!” Adetutu Odubela-Onasanya from Nigeria is a pediatrician and fled her country in 2013 because of religious persecution. Unfortunately however, she was separated from her family. Her husband with their two elder daughters is in UK, and Adetutu with her youngest girl ended up in Bulgaria. They live in the accommodation center in Ovcha Kupel. Adetutu has been wrestling with red tape since 2013. After her procedure for asylum was suspended, she re-applied. In March her application was turned down. Adetutu wants to reunite with her family in Britain. Now she counts on legal aid provided by Mission Salvation. She tells us more about the support she receives from the foundation:

Bulgarians are connoisseurs of home-made canned food and beverages

North Macedonia’s progress towards the EU should be bound up with the implementation of the Treaty of Good-neighbourliness, Friendship and Cooperation with North Macedonia, signed in 2017. A  memorandum   containing this and other conditions for..

“Bulgaria is far from a poor country”, financial expert Dino Dionne commented on the American platform Quora in response to the question “Why countries like Bulgaria and Romania are so poor after the fall of Communism?” “If you compare an average..

Bulgarians are connoisseurs of home-made canned food and beverages

53% of Bulgarians grow home-made products and prepare their own food and drinks , a study conducted byTrend commissioned by the 24 Chasa daily shows...