A negative demographic trend has been observed in the civilized world for some time now, which is quite alarming. On the other hand, we have witnessed rapid population growth in developing and low-income countries, unlike the democratic countries with high living standard, said Professor Veselin Vasilev, Doctor of Psychology at the University of Plovdiv “Paisii Hilendarski” regarding the global changes that occurred before the beginning of the coronavirus pandemic.

That is why we should not be surprised with the demographic trends in Bulgaria. The forecasts that the number of newborn children in Bulgaria would increase after the lockdown introduced in this country in the beginning of 2020 did not materialize. The natural population increase in this country continues to be negative. Although the demographic indicators in Bulgaria’s capital Sofia are better than in other Bulgarian cities, some figures are a reason for great concern and soon they will directly affect this country’s social system.

“The Dependency Ratio is the proportion between the people of working age and those of non-working age- sociologist Nevena Germanova explained in an interview for the Bulgarian National Radio. - According to statistical data, the number of people of non-working age account for 48% of the number of people of working age. The coefficient of demographic replacement is another indicator, which is a reason for concern. It characterizes the reproduction of the labor resources. According to this indicator, 72 people from the lowest working group replace 100 people who leave the labor market”.

According to the latest forecasts, the number of residents of Bulgaria’s capital Sofia is likely to decrease slightly by 2050.

Then is it necessary to build new residential buildings in the scale allowed by the existing urban development plan, taking into consideration the abovementioned forecast and the fact that migration to Sofia has slowed down.

In Emil Hristov’s view, the urban development planning must focus predominantly on the renovation of old buildings in Bulgaria’s capital.

“The old residential buildings are worn out. It is very important to ensure rehabilitation and energy renovation of these buildings. We made some technical studies and found out that the panel blocks are not among the buildings that need seismic and architectural renovation the most. The old buildings in the central part of the Bulgarian capital are most problematic. They were built under old regulations and norms, which makes them more dangerous”.

Emil Hristov called on the Sofia municipality to pay greater attention to its housing strategy.

“The authorities need to develop a strategy that would allow people who need social homes to receive subsidies. Some young families, seniors, or disadvantaged people fall within this category. It is necessary to facilitate the procedures for renting municipal homes, as well as to increase their number. At present, Sofia is the EU city with the lowest number of municipal and social homes. ”

A huge empty space in the center of the "Trakia" quarter in Plovdiv will become a green neighborhood of a new generation, without cars. Construction is expected to start by the end of April. Curiously, no cars will be allowed in the.. 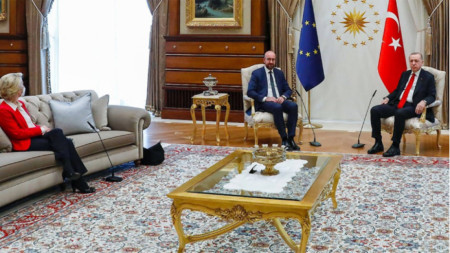 EU-Turkey summit: Promises for Erdogan, no chair for Von der Layen Promises of a new EU commitment to Turkey and an issue that provoked criticism and jokes marked the meeting of Turkish President Recep Tayyip Erdogan with European..

People come and go but legends remain in Shishentsi village

Shishentsi, a village in Vidin region is located in Bulgaria’s northwesternmost point, just 5 kms. from the border with Serbia. According to..