William Ewart Gladstone and the Bulgarian cause

A portrait of William Gladstone, the cover of the book “The Bulgarian Horrors and the Question of the East” and one of his caricatures.
Photo: Архив
Prominent British politician, celebrated orator, journalist and writer William Ewart Gladstone was born on 29 December 1809. His name is associated with the struggles of the Bulgarian people for liberation from five centuries of Turkish rule. In connection with his 200th birth anniversary the Archives State Agency presents a documentary exhibition with the motto “William Gladstone and the Bulgarian National Cause” organized jointly with the National Library. British Ambassador to Sofia Steve Williams joined its opening:

“William Gladstone was a powerful figure in Victorian politics and served four times as prime minister. He advocated free trade; founded the Post Savings Bank and introduced state primary education in Britain. His outstanding achievements in human rights and liberties and for greater political and economic freedom have been widely recognized. Even today Gladstone is acknowledged as one of the greatest British prime ministers. Winston Churchill was among those who saw in him a source of inspiration. He has been remembered not only as premier, but also as a great reformer and a devoted Christian. Absolutely shocked by the massacre of thousands of Bulgarians in the aftermath of the 1876 April Uprising, he published a poignant, polemic brochure, “The Bulgarian Horrors and the Question of the East”. In the course of just one month the pamphlet sold in 200,000 copies. Gladstone urged other prominent figures such as Giuseppe Garibaldi to join the Bulgarian cause. The campaign that he opened led to all-European demands for reforms in the Ottoman Empire. They contributed to Bulgaria’s reemergence as an independent nation in 1878. Gladstone’s activities won him a heroic aura, and his name became popular in Bulgaria.”

Historian Roumen Genov contends that William Gladstone was Britain’s most outstanding figure to have strongly supported Bulgarian in very dramatic moments. He supported firmly the national cause when it was fair and kept his keen interest in Bulgarian affairs to the end of his long life.

“He did all that when Britain was a leading Great Power in Europe, and according to some even the superpower of the 19 c.”, Associate Prof. Genov explains. “In fact he was the most powerful figure on the British and the world political scene. However, Gladstone supported Bulgaria chiefly because he was a Christian statesman who was convinced that the power and influence of his country should be based on the principle of morality and moral leadership. With this in mind he backed other nations struggling for freedom: Irish, Greeks, Italians, Afghans, Zulus. He was known to the Bulgarian opinion leaders since 1860s when he served as prime minister for the first time. However, he rose to the status of a hero for them in 1876 when he put to use the whole of his fiery rhetoric to condemn the atrocities committed by the Sultan’s government and his functionaries, and to point a finger at the moral responsibility of the then-British government that would tolerate those actions for the sake of keeping the status quo in Eastern Europe intact. Some might say: Gladstone did no great deal – writing pamphlets and making speeches. However, we should be aware that the art of rhetoric was highly regarded at that time, and that the British Empire was actually ruled through speeches made in parliament, while the press emerged as the fourth estate. For all this the impact of Gladstone’s efforts was huge, and the then-Bulgarian leaders knew that perfectly well. In 1876 Todor Ikonomov, a renowned Bulgarian intellectual and politician, wrote that Gladstone had erected a monument in the heart of every aware Bulgarian with his intervention into the Eastern Crisis. For our compatriots of that time Gladstone was one of Bulgaria’s liberators. Later in time he defended the Bulgarian cause on other occasions with the firm thesis that the Bulgarians are capable of their own government by virtue of their constitution. He firmly supported the Unification of Northern with Southern Bulgaria in 1885.”

To this present day Bulgarians are very grateful for Gladstone’s advocacy. In 1909 his 100th birth anniversary turned into a national celebration with high-profile events held in parliament, at Sofia University, in schools and churches. A Bulgarian delegation was sent to attend centenary events in Britain, and laid a wreath at his monument with the following inscription: To the great William Gladstone from the grateful Bulgarian people. When in 1928 his son Viscount Herbert Gladstone came to Sofia, he was made honorary citizen of the capital city, and his visit gave rise to major street rallies of gratitude. Twenty years back, on the eve of democratic changes, his great grandson Sir William Gladstone made a visit to Bulgaria to open an exhibition devoted to the great British politician. Some of the items featured then are on display at the current exhibition.

Today dozens of streets and a few schools in Bulgaria are named after William Gladstone. Two Bulgarian historians, Andrey Pantev and Roumen Genov, have written monographs about him. To mark his 200th birth anniversary the New Bulgarian University hosted an international conference. One of the halls there will be given his name. A documentary film about the British politician is in the making. Mati Bolgaria society organizes a concert for Gladstone’s 200th birth anniversary and the Sofia City Hall has decided to build a monument to him in the capital city.

On January 17 the Bulgarian Orthodox Church honors the memory of Saint Anthony the Great who is regarded as one of the founders of monasticism in the Christian world. In Egypt, Saint Anthony founded a monastery which is preserved until present and is.. 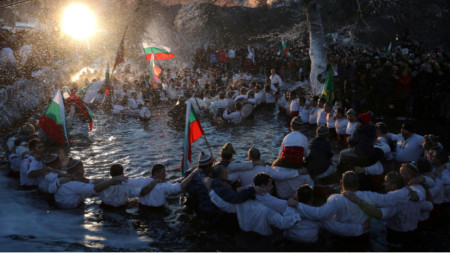 When Epiphany comes, water purifies the world for new beginning

Today, January 6, the Bulgarian Orthodox Church marks one of its biggest holidays - Epiphany. According to Christian teachings, on the day of the Baptism of Christ by John the Baptist, all three Persons of the Holy Trinity manifested. When the..

On this date 55 years ago, the prominent Bulgarian National Revival figure Sophronius of Vratsa (Sofroniy Vrachanski) was canonized as a saint by the Bulgarian Orthodox Church. He is known for having made the first two hand-written copies of the first..