Musician of the Year 2012 awards 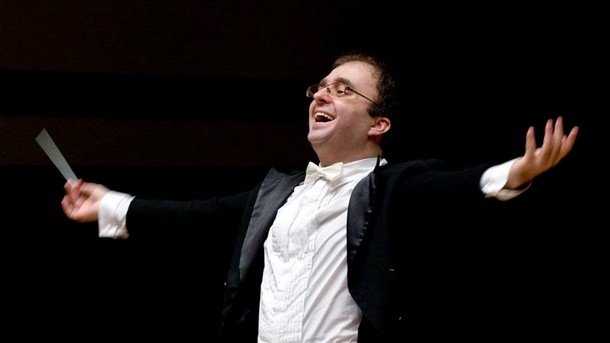 Cinductor Nayden Todorov is the new holder of the Musician of the Year Award for 2012
Photo: V. Balevska
/
Update Required To play the media you will need to either update your browser to a recent version or update your Flash plugin.

On June 10th the prestigious Musician of the Year awards will be handed out at a festive gala concert in Sofia’s Bulgaria concert hall for the 22nd time. Over the past year, the listeners of Horizont program of the Bulgarian National Radio voted for their favorite classical music artists as the prize for best conductor this year goes to Nayden Todorov – director of the state opera theater in Rousese and permanent guest conductor of the Sofia Philharmonic Orchestra.

“The Musician of the Year award is not determined by a jury but by the audience and I believe this is the biggest recognition in my life and makes me really happy”, Nayden Todorov told Radio Bulgaria. For 8 years, he managed to turn the Rousse opera into one of the leading cultural institutes in the country. For his work as director, the conductor told us more:

“It is not hard to maintain what one has achieved in Rouse as musicians there are at an extremely high level. The only thing required of me as their leader is to have good planning skills. They give a lot from themselves and work with great dedication. For them the orchestra is not simply work and this attitude to art is felt in their concert performances."

Nayden Todorova combines the conductor’s baton with tours in Bulgaria and abroad and teaching in New Bulgarian University. Here is what his future engagements are:

“Until the end of the season we will make productions in Rouse of operas of Verdi on the occasion of his 200th birth anniversary. Later, we will participate in festivals in Switzerland and Italy. Apart from my engagements as director, I will have two concerts with the Sofia Philharmonic. The one is in December with Svetlin Rousev in which we will perform concerto for violin and orchestra of Johannes Brahms.  In the program is also Symphony in D minor of Cesar Frank. The second concert is at the end of May 2014. Soloist is pianist Yovcho Krushev and the audience will be able to enjoy works of George Gershwin and Leonard Bernstein.  Also, with the Rousse Opera we are planning to hold a series of opera productions in Sofia. We hope we will be able to bring delight to the audience with interesting works that are rarely performed in the capital.”

the participants in the poll for naming Best Musician of 2012 distinguished Mihail Angelov, one of the leading figures in the conducting field in Bulgaria, for his exceptional contribution to Bulgarian culture.

Bulgaria is the birth place of one of the most distinguished musicians of the 20th century Alexis Weissenberg. The pianist who until his very last breath was very fond of his native country left us last year. The Musician of the Year distinguished Weissenberg posthumously as one of the artists who have changed the musical history of the country.

In her debut in 2012, the 17-year-old pianist Constanza Dyulgerova put her name in the history of Musician of the Year. She is a student of Alexander Vasilenko and studies at the Lyubomir Pipkov Musical School in Sofia. The pianist made her first serious concert last year with Classic FM Orchestra under the baton of Grigor Palikarov.

For the first time since the existence of the Musician of the Year awards, there is a new category for Music Manager of the Year and it goes to Mila Pavlova, artistic director and creator of the Days of Music in the Balabanov House Festival in Plovdiv. The concerts at home were typical for the wealthy families from the city’s intelligentsia in the past. This type of concerts inspired the flutist to found a forum that would perpetuate this tradition.  The festival is held twice in spring and autumn.

Among the artists at the gala concert Musician of the Year is world-famous musician Martin Panteleev, main conductor of the Sofia Philharmonic. He receives an award for active creative work. In addition to having conducted a number of prestigious orchestras across the world, his artistic biography is complemented by his activity as violinist and composer.

Among the award winners this year is also composer Rumen Boyadzhiev Jr. The award in the category Premiere goes to the children’s operetta The Little Match Girl based on the eponymous fairytale of Hans Christian Andersen. The first performance was in December 2012 under the baton of Grigor Palikarov. Rumen Boyadzhiev Jr. is a laureate of Bulgarian and international competitions of theater and chamber music and in 2009 he became the winner of the award for Best Film composer of the year.

Famous conductor Maxim Eshkenazi was the creator of the Fortissimo Famiglia initiative whose main goal is to awaken the interest of youngsters and their parents to classical music and instruments through educational concerts. Thanks to them, Famiglia Fortissimo receives the award for best musical project of 2012.

Famous pop singers Stanley and Lubo Kirov, together with actor Hristo Mutafchiev, presented their song Where There Is No Time at the end of October...