/
Update Required To play the media you will need to either update your browser to a recent version or update your Flash plugin.
Musician Angel Dimitrov is popular among the folk musicians as mandolin player. This music instrument is traditional in the Bulgarian folklore music and has a very delicate sounding. Mr. Dimitrov has been performing for eight consecutive years as a soloist of the Bulgarian National Radio Folk Orchestra. When he was a student, he was a fan of Deep Purple band and its guitar player Richie Blackmore and used to play on both guitar and mandolin. He was very good at both music instruments-folk music and rock feed his rich creative fantasy and his friend call him Richie. Angel Dimitrov was born in 1967 in the town of Haskovo (Southeastern Bulgaria) in a family of folk musicians. There, he was captured for the first time by the sounding of the mandolin. “It all happened by chance. The school management was looking for trumpeters. Initially I chose this instrument with my friends, but later when I saw the mandolin I decided that I wanted to play this instrument badly. I had very good instructors in the town of Haskovo. They prepared me for the music contest at the folk school in Shiroka Laka where I found other people who taught me a lot. Of greatest value for me was the knowledge I received from Rumen Sirakov".

Angel was progressing in both instruments-the guitar and the mandolin when he started his music career. He learned how to play some of the music hits of Deep Purple and performed them together with the school rock band. He found similarity between the music technique of Richie Blackmore and his performance on the mandolin. He mixed well both instruments in his music pieces and combined rock and folk music in one sounding. “”Rock music influenced on my performance with the mandolin and my experience with this instrument influenced over the rock style I play. This is how my music style emerged”, says Angel Dimitrov.

The four year study at the Plovdiv Academy of Music, Dance and Fine Arts helped Angel grow in his career. He played in the music orchestra of this academy and performed pieces of renowned musicians such as Kiurkchiysky and Mutafchiev as well as authors’ music of other students. Angel Dimitrov and piper Nedyalko Nedyalkov formed a duo, winning the first award for young musicians at the National Folk Music Meeting in Stambolovo. He often played along with the renowned accordion player Petar Ralchev. Nowadays they are regular guests of the international stages where ethno jazz and folk music sound.

When he was young, Angel Dimitrov learned how to play wedding music. He performs during his music career in Melody and Youth orchestras headed by Ivan Milev and Thrace orchestra of the renowned clarinet player Ivo Papazov. “People were not rich in the past, but everyone could afford a huge wedding with lots of fun and entertainment”, recalls Angel and adds that folk music connected him with many remarkable personalities and musicians in one big family.

He received many invitations from rock musicians along with his multiple performances on the folklore stage. He won the first award with the SJK rock band at the Varna rock festival and made some recordings in a music studio in Sofia. In 1999 he settled in the capital Sofia and was invited to take part in the music albums of many folk and jazz musicians such as The Spirit of Bulgaria with piper Theodosii Spassov, Cosmic Voices, Georgi Petrov and Friends, Pletenitsa, Senza Sordino with the BNR Big Band with conductor Antoni Donchev, etc.

“Angel Dimitrov created interesting and varied music genres - folk, film music, rock, ethno, jazz, etc. He created his first music album Distorting Mirror where two of the tracks feature Brainstorm Jazz Band. His second album entitled Proto-Bulgarians features on the Bulgarian history where he mixed typical Bulgarian rhythms with hard rock sounding. He wrote the pieces the Crafty Peasant and Edirne Bazaar for the Canopus quintet. He wrote the music to the Bat Sando documentary movie about the five-time World and European wrestling champion Alexander Tomov. In his concert activity with the Folk Music Orchestra of the BNR, he showed his great talent of composer and performer. He recorded many authors’ pieces such as the Varna Dance, Shoppe Chain Dance, Christmas in Romania, etc.”

Angel Dimitrov is a masterly player of guitar and mandolin and traveled over the years across the globe with various formations. He played in Japan with piper Nedyalko Nedyalkov, the rebec-player Georgi Petkov and Angels’ Voices female choir. He recently appeared with Fraser Fifield band at the Balkan Traffic Festival in Belgium. In 2011 he participated at this festival through an accordion project along with Bulgarian masterly musician Petar Ralchev, the renowned Romanian accordionist Ionica Minune, Serbian accordionist Boban Bjelic and Belgian jazz accordionist Tuur Florizoone. 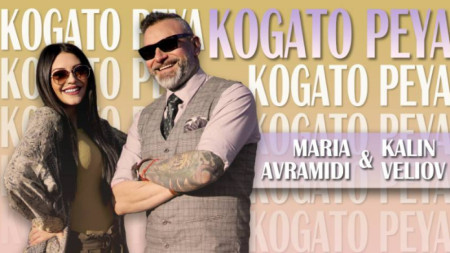 In 1967, Milcho Leviev created the music to the film "Detour" ( Otklonenie), based on a novel by Blaga Dimitrova,..