Samuel – Bulgaria’s Cain… who had his reasons

In 2014, this country marks 1,000 years since the tragic death of Samuel of Bulgaria, who couldn’t bear the sight of his blinded warriors after the Battle of Kleidion and most likely suffered a fatal heart attack as a result. Radio Bulgaria has already framed the anniversary and the forthcoming commemorating events, but Samuel’s life appears to have been so colorful and full of dramatic turnabouts that a mini-series of articles devoted to it would be more than justifiable.

For instance, on 14 June 987 Samuel ordered the execution of… Aaron, his own brother! However, some prehistory here proves that he had a good reason to do that.

In the late 10th century, both Bulgaria and Byzantium had entangled themselves in a war with Prince Sviatoslav, the ruler of Kievan Rus’. The relations between the two neighboring empires were tense as well, especially after the death of the Byzantine Princess Maria Lakapina, who had been married to the Bulgarian Tsar Peter I. The latter was forced to send his two sons – Boris and Roman, as honorary hostages to Constantinople, in order to maintain the peace. However, Petar I also died of a heart attack after a defeat by Prince Sviatoslav in 969 /or 970/. Byzantine Emperor John I Tzimiskes took his chance and invaded the eastern parts of the Bulgarian Empire, kicking the Russians out at the same time. Everyone would say that it was the end of the First Bulgarian Empire, as the two heirs of the throne remained in Constantinople’s golden cage, but there was that Cometopuli dynasty to the West…

Samuel was the fourth and youngest son of Comita (count) Nikola - a Bulgarian nobleman from the Cometopuli dynasty, who might have been the count of Sredets (the ancient name of today’s capital Sofia), though other sources say he was a regional count somewhere in the region of what’s today Macedonia. Samuel’s mother was Ripsima of Armenia. His Armenian roots are also suggested by his hooked nose, as examined and reconstructed by contemporary Bulgarian anthropologists. A plaster copy of his skull and mandible were provided by the Greek government as early as 1974-76.

In the period 970 – 971, the four brothers with the biblical names – Samuel, David, Moses and Aaron rebelled against John I Tzimiskes. The chronology of the events that followed is not clear due to contradicting sources, but it is sure that after 971 Samuel and his three brothers were de facto the rulers of the Western Bulgarian lands. Despite being the most distinguished of the four, Samuel would refuse to overthrow the legislative power of Tsar Boris, still held a hostage in Constantinople. This however wouldn’t be an obstacle to his intentions to oppose Byzantium in every possible way and after the death of John I Tzimiskes in 976 the opportunity emerged.

The first two contradictory deaths in the legend of Samuel occurred during the assault, launched along the whole border by the Comitopuli brothers back then. Only within a few weeks after the start of the campaign David was slaughtered by Vlach vagrants near the town of Prespa – the official version, but historical sources claim his death was actually quite mysterious… At the same time Moses was fatally injured by some stone, accidentally thrown from behind the walls of the besieged Serres. There are historians, who would blame Samuel for both fatal endings, due to his lust for power. At the same time no historical source has confirmed that version so far and the fact that Samuel had refused to take the place of the legal tsar through all those years comes only to confirm his innocence…

One way or another, a fateful event that followed would decide his destiny: somewhere around 978 the two heirs of the Bulgarian throne returned from Constantinople within quite vague circumstances. An escape, however, would be a very reliable version, as they were both dressed like Greeks – a fact that would turn into a fatal misfortune. A Bulgarian border police officer mistakenly took Boris for an enemy due to his clothing and killed him. The only thing, which saved Roman’s life, was his frantic screaming in Bulgarian.

Despite being turned into eunuch in Constantinople before that, the new tsar was warmly welcomed and inaugurated by Samuel. At the same time Roman was aware of his weakness and de facto he let his talented top general rule the country.

Unfortunately, the first danger that the new ruler had to cope with was… his own brother. The new Byzantine Emperor Basil II had decided to bribe Aaron, who was at that time in charge of the lands, situated most closely to Thrace, by offering him a marriage with his sister. Aaron wanted to stop the war with Byzantium and to unseat his brother, so he accepted. However, the woman, sent from Constantinople and accompanied by the Sebastian Bishop, had nothing to do with the emperor’s sister. As Aaron immediately found out about the deceit, he ordered the burning of the bishop, historical sources say… When Basil II heard about the balefire, he gathered a huge army and besieged Sredets in the course of 20 days, but unsuccessfully. Upon his return, he was ambushed in the Gate of Trajan mountain pass on his way back to Philippopolis by the united forces of Aaron and Samuel, who inflicted such a defeat to the Greek army that Basil’s life was hanging by the thread and he escaped miraculously with few of his men.

The fact that Samuel helped his brother for the greater good wouldn’t mean forgiveness for his betrayal. Less than a year after the great victory on 17 August 986 Samuel ordered the slaughtering of the entire Aaron’s family and the execution of the latter… The new Bulgarian Cain had no time to lose, as he was about to continue his 40-year-long battle with the one who would be later remembered as the Bulgar-slayer… 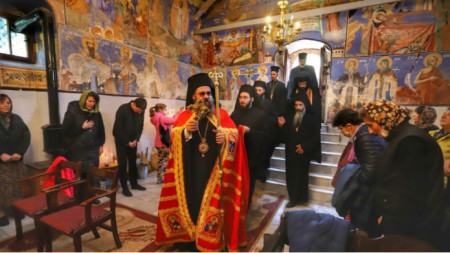