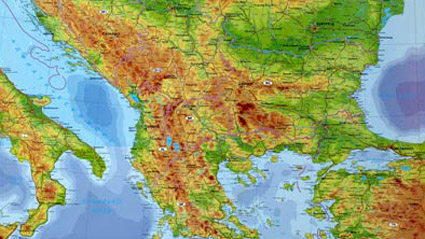 Greece could face the danger of exiting the Eurozone, if it has to adopt more austerity measures, and it is not a bluff, Greek Minister of Finance Yanis Varoufakis said, adding that no one could predict what the consequences of such a scenario could be.

Turkey’s Ambassador to Austria arrives to Ankara for consultations

Ankara has announced that its Turkish Ambassador to Austria arrived to his country for consultations, in order to protest against the symbolic decision of the Austrian National Assembly to recognize the Armenian Genocide by the Ottoman Empire during the WW1. On the eve of the 100th anniversary of the genocide, the National Assembly of Austria held a minute of silence in memory of the victims of the Armenian Genocide.

On occasion of the provocative attack against a police station in Macedonia perpetrated by a group of armed criminals who arrived from Kosovo, the Ministry of Interior In Pristina announced that it strongly condemned each act of violence against the Macedonian Police. Meanwhile the authorities in Kosovo called on Macedonia to carry out a professional investigation.

Over 50,000 Albanian citizens left their country in 2014 only. They searched for a better life in EU member states, data of the Albanian Institute of Statistics show. 72% of the migrants said they were forced to leave their country due to the high unemployment. Over 7,000 Albanians sought shelter in Germany since the beginning of 2015.

A plane of the Austrian Airlines carrying the state delegation of Bosnia and Herzegovina had an emergency landing at the Washington airport due to fire in one of its engines. Premier of the Federation of Bosnia and Herzegovina Fadil Novalic and the Central Bank Governor Kemal Kozaric were onboard this plane. The delegation participated at the annual meeting of the International Monetary Fund and the World Bank. The plane departed to Vienna, but landed back at Washington airport only 15 minutes after it took off. No people were injured during the accident.

The falcon jet carrying Serbian President Tomislav Nikolić had to make emergency landing on Belgrade Airport due to failure of one of its engines. President Nikolić who departed for his meeting with Pope Francis in the Vatican was forced to cancel the event. The authorities are still trying to find out what damaged the plane engine.

The Romanian authorities detained 26 people who are believed to be part of a criminal network which stands behind a series of jewelry robberies in Europe. According to local prosecutors, the criminal network resembled a military unit and its members who amounted to nearly 100 people went through special training courses. The robberies perpetrated by this group lasted for 60 seconds or less. The Romanian group made a series of robberies in the UK, France, Germany and Belgium and the total amount of the stolen jewelry amounts to EUR 10 million.

A protest against threats made to journalists was held in front of the building of the Macedonian Council of Ministers. A funeral wreath bearing the inscription “final greeting” was delivered to the home of Macedonian journalist Borjan Jovanovski. Mr Jovanovski is known for his critical publications against Premier Nikola Gruevski and his cabinet. As soon as the information about the deepening coronavirus crisis spread, people began buying various detergents and gels for disinfection. The antibacterial gels we use to clean our hands when we are outdoors sold out in many shops... The number of Bulgarians rediscovering the charm of their homeland and deciding to turn a new page in their lives after years of living abroad is..

As soon as the information about the deepening coronavirus crisis spread, people began buying various detergents and gels for disinfection...