Lilly Drumeva is a name well known in this country, but also in Europe and USA. She started out her career in country music 20 years ago. She is mostly known as a singer-songwriter and founder of the bluegrass group Lilly of the West back in 1996. In that time she has released 9 albums, and with her band has toured Europe and has taken part in a host of concerts and festivals. But Lilly Drumeva has performed most often in the USA – where country music was born. There, in the “land of opportunity” she has specialized country and bluegrass.

Some time ago she published a book entitled “In the mood with Lilly – 50 music themes”, presenting country, bluegrass, blues, swing, rock and roll and other music genres. To mark 20 years on stage, together with the other band members of Lilly of the West, Lilly Drumeva is releasing her new, 10th album called Strong Machine. “This album is different from our previous albums stylistically,” Lilly Drumeva says. “Our previous albums were mostly country and bluegrass whereas in Strong Machine we swerved towards pop. Actually there was nothing intentional in that, it happened when I met up with Stamen Yanev and Nikolay Peev from the band Acoustica. One day Nicky came up and told me that he had written a song especially for me, called Somewhere back then, and it was the first one recorded for the album. We took this song and decided to work several more acoustic pop songs around it. This project took around two years of work, and the influence of the two musicians is very evident – they are pop music whizzes. I have always wanted to release a pop album. I think it turned out to be a superb compilation of ten original songs. Some of the lyrics are by Dessi Sofranova. There is a song composed by a friend of mine from London – Hannah Elton-Wall, the lyrics are by poet-singer Grisha Trifonov, who, I am sad to say, left us last year.”

Lilly of the West had a series of concerts in Sofia and Varna this spring and will continue in summer at some of the open air stages in the capital city. What else has the band got lined up for its fans? Lilly Drumeva:

“At the beginning of August we shall be going to France where we shall be performing at a bluegrass festival for the third time. At the beginning of September I shall be going to Ljubljana at the invitation of Slovenian pop star Didka – she invited me to take part in her concert on 11 September when she will be promoting her new album. The idea is for me to sing one of her songs with a verse in Slovenian and vice versa – for her to sing one of my songs with a verse in Bulgarian. I am looking forward to that as I have never performed in Slovenia. On 1 October, together with my band we shall mount a big concert in Sofia to mark the 20th anniversary of Lilly of the West. We shall sing select songs from our enormous repertoire, included in the ten albums we have released so far.” 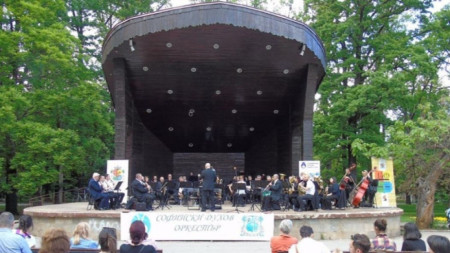