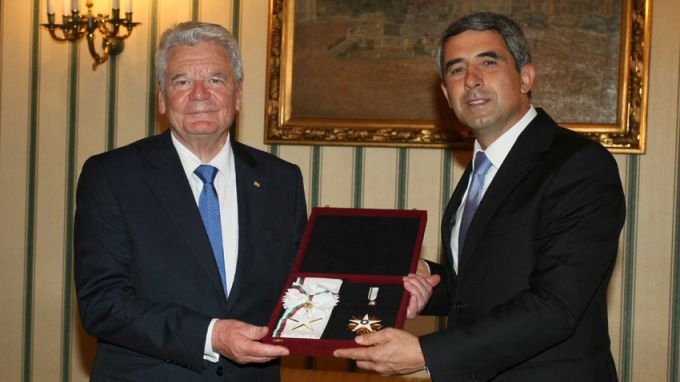 Germany’s President Joachim Gauck is paying an official visit to Sofia between June 22 and 24. On the day preceding the EU Membership Referendum in the UK President Gauck said that regardless of the outcome of the UK national referendum, he is to encourage all convinced Europeans and democrats to return peoples’ faith in the European values. The President of the Federal Republic of Germany arrived on a three day visit to Bulgaria at the invitation of Bulgaria’s Head of State Rossen Plevneliev. The main topics of discussion regarded bilateral economic relations between Germany and Bulgaria and the EU security on the eve of the NATO summit in Warsaw.

The seventy six-year old German President Gauck, who was a famous dissident in the former German Democratic Republic, also accentuated on the assessment of the communist regime.

“The past leaves its permanent mark on the present. The German people walked the painful road towards the conviction that one must realize his own mistakes and guilt during the totalitarian regime. If Bulgaria wants to use our experience we are always ready to help”, Joachim Gauck said after the meeting with President Plevneliev.

In return Bulgarian President Rossen Plevneliev accentuated on the long and excellent relations between the two countries, which is proved by official statistics, too. Germany is Bulgaria’s most important trade and economic partner. The trade exchange between the two countries amounted to EUR 6.3 billion in 2015. Moreover, Germany is the fourth biggest investor in Bulgaria- the German capital invested in that country amounts to EUR 2.6 billion.

“Bulgaria and Germany are upholding the European values and we believe that the common European approach towards more integration, cooperation and supremacy of law and order is the only correct response to the current challenges”, President Plevneliev said and added: “The European security is facing a series of challenges. That is why the countries must cooperate well in the security and defense field. We are confident that the NATO countries will show unity during the summit in Warsaw and that NATO will demonstrate ability to guarantee the security and the collective defense of all members, including the countries from the Eastern and the Southern wing.”

In President Plevneliev’s view, the quick accession of Bulgaria and Romania to the Schengen Area is of great importance for the security of the whole European Union. Germany’s President Joachim Gauck pointed out that the EU was expecting that Bulgaria would consolidate the rule of law, because Schengen membership is not only a technical issue.

“We are concerned with the unpredictable actions in Eastern Europe and we started to think more often of NATO’s role”, the President of the Federal Republic of Germany Joachim Gauck went on to say. “The alliance must follow carefully the events both in Northeastern and Southeastern Europe. The public in Central and Western Europe has to be better informed about the topical situation in Bulgaria.”

The EU Membership Referendum in the UK was also among the topics of discussion between Presidents Plevneliev and Gauck. Being convinced Europeans we are concerned about the outcome of the referendum in the UK and we would be very satisfied if other EU members do not start questioning their membership after the UK referendum, President Joachim Gauck said and added:

“The pro-European states which believe in united Europe must cooperate even closer in a moment when mistrust towards the European idea is shown. We want and we must oppose the populist movements which doubt the European project. Although their number is still very low, they manage to attract many supporters. The European politicians and the civil society must oppose strongly those populists.”

The EU is the only recipe for peace and I am sure that the EU Membership Referendum in the UK will be successful, Bulgaria’s head of state Plevneliev said in return and added:

“I am confident that in this crucial moment everyone would realize that the UK is taking a historical decision and that there are a lot of consequences stemming from the result of that referendum. I believe that the people in the United Kingdom know well what European Union means. The UK referendum will fill all of us with more confidence and that peace project will continue to help all nations.”