The fight against organized crime and corruption has been high up on the Bulgarian agenda ever since the start of the period of transition. It has been the subject of a host of discussions and forums, yet the results show that the country is not in a capacity to cope with the problem effectively.

At a conference organized at the Bulgarian News Agency, the EU-Russia civil society forum and the BlueLink civic action network presented the highlights from a round table on the prospects of cooperation between law enforcement bodies in the EU and civic investigation groups for fighting transborder political corruption. The conference was attended by former and practicing prosecutors and examining magistrates from EU member countries, as well as from Russia and Ukraine. The aim was to clarify the mechanisms civil society and journalists can apply to assist the work of the prosecutor’s office, providing information about irregularities and discussing working models, as well as the problems prosecutors face in their fight against corruption at all administrative levels.

Pavel Antonov from Blue Link, Bulgaria about the conclusions drawn:

“One of them was how important it is to have transparency in the cooperation between the prosecutor’s offices and the anti-corruption bodies in the various countries. The prosecutors themselves said it – it important for society to know they are working together. They laid emphasis on the role of the media and civic organization as a key factor in obtaining support for their work because they are subjected to different forms of pressure. Another important conclusion was that there have to be coordinated bodies in each of the EU members to fight corruption. This is something that is being discussed in Bulgaria, and has been functioning successfully in Spain and in Italy for years.”

The so-called anti-corruption body in this country has not been approved by parliament as yet, but even if such a body is to become functional at some point, there exists a risk of its turning into one more administrative structure with a huge budget but without any real benefit for the public or the fight against corruption. Antonov added he was disappointed with the lack of interest by the institutions in the sphere of security and combating organized crime.

“Regrettably, the invitations we sent out to the Bulgarian institutions involved in fighting organized crime, were either politely turned down or went unanswered. I am sincere in saying I regret this, because I think we heard many useful things which can be of practical help to anyone fighting corruption.”

The participants were categorical that cooperation between Bulgaria and Russia and the EU members in law enforcement carries many benefits. As to coordinated work among the EU countries, the prosecutors say that the countries must make efforts to hamper organized crime and people involved in corruption schemes go unpunished because of legal loopholes or oversights.

The visit to Bulgaria by Russia’s Prosecutor General Yury Chaika was also discussed at the round table. The fact there is no information about agreements concluded or decisions made during his meeting with Bulgaria’s Prosecutor General Sotir Tsatsarov is cause for concern, as no public information has been released as yet, which is a vital factor for transparency in decision-making, something the institutions have been striving to achieve – or at least have been paying lip service to, the participants say.

Harry Hummel, Associate Policy Director at Netherlands Helsinki Committee, says that the fight against corruption and for human rights must go hand in hand, but that is not being done, because some member countries have not been cooperating with the investigative bodies on major transnational crimes. There must be stricter control of the financing of different projects by Russia and by third countries on EU territory, as there is evidence of money laundering by Russian oligarchs in various European countries. 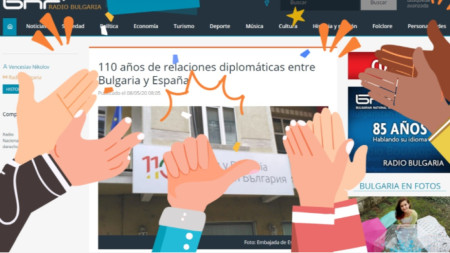 Once again, Radio Bulgaria is among the prize-winners of the Worlds and Colours competition organized by the Association of Spanish-speaking Journalists in Bulgaria . The awards are for articles and programmes in Bulgarian and in.. The first of its kind education campaign named “Forest and Climate Change” will be held on the territory of the Southwest State Forest Enterprise with the participation of experts in forest pedagogy. Forest experts are to acquaint children.. The first pairs of Dalmatian pelicans which in March built their nests in the Srebarna Nature Reserve on the Danube River hatched a new generation . The pelicans were born in the wooden pile platforms specially built for them in the northern..

The first pairs of Dalmatian pelicans which in March built their nests in the Srebarna Nature Reserve on the Danube River hatched a new..

Once again, Radio Bulgaria is among the prize-winners of the Worlds and Colours competition organized by the Association of..

The first of its kind education campaign named “Forest and Climate Change” will be held on the territory of the Southwest State Forest..