North Macedonia’s new President to be elected at run-off The voter turnout at the Presidential elections in North Macedonia reached 42%. A total of 1.8 million people were registered and had the right to cast their ballots at these elections. 4% of the ballots (34,000) are invalid. Thus, North Macedonia may enter a constitutional crisis after the run-off on May 5. The candidate of the ruling coalition of SDSM and the Democratic Union for Integration Stevo Pendarovski will need the votes of the people who supported another Presidential candidate- ethnic Albanian Blerim Reka. The supporters of Blerim Reka are not expected to vote for the opposition VMRO-DPMNE candidate Gordana Siljanovska. However, the voter turnout of the run-off must exceed 40%, in order to comply with this country’s constitution. The main law of North Macedonia does not specify whether new Presidential elections must be held in this case or the new head of state should be elected by the National Assembly.

Romania’s cabinet approved a memorandum for construction of a new bridge over the Danube between the Romanian town of Zimnicea and the Bulgarian town of Svishtov based on a public-private partnership. The members of the Romanian government pointed out that this project is extremely necessary due to the intense traffic between Romania and Bulgaria and the increase in bilateral trade and transit between the two countries. The road connection between Svishtov and Zimnicea shortens the route Bulgaria-Romania-Central Europe-Western Europe by four hours as compared to the alternative route through Ruse and Giurgiu.

USA calls on Serbia not to join Eurasian Economic Union The media in Serbia announced that this country was asked by the USA not to join the Eurasian Economic Union, because it is a one-way street and contradicts to the negotiations for accession to the European Union. Serbian diplomats also contend that establishment of a free-trade zone between the Eurasian Union and Belgrade is incompatible with this country’s participation in the common European market. Russia’s Ambassador to Belgrade Aleksandar Chepurin announced that the negotiations with Serbia were completed and that the procedure for the agreement which will be signed in October this year has already started.

Ankara and Athens in dispute over demilitarization of Aegean Islands

Turkey’s Minister of Defense Hulusi Akar called on Greece to cling to the demilitarized status of the Aegean Islands. Ankara contends that Athens is violating the international law and agreements by arming the islands in the Aegean Sea, thus harming the neighborly friendship. Greece’s Ministry of Foreign Affairs replied that Turkey should learn to respect international law as it stands, instead of being selective in its interpretation.

Leaders of Serbia and Kosovo to meet in Berlin On the second day of the Orthodox Easter (April 29) Germany and France will gather in Berlin the leaders of Serbia and Kosovo Aleksandar Vucic and Hashim Thaci. Germany’s Chancellor Angela Merkel and Frances’ President Emmanuel Macron are trying to find a solution to the Serbia-Kosovo issue. Berlin and Paris are making another attempt to save the EU policy in the Western Balkans by reducing the influence of the USA, Russia and China in this region. The negotiations between Belgrade and Pristina were blocked by the relentnessness of the two countries which makes the task of Angela Merkel and Emmanuel Macron very difficult. The USA provided to Albania 3 Black Hawk transport helicopters to bolster its military capacity. The three helicopters are only part of the US support package for Tirana which joined NATO in 2009 and is currently replacing its old weaponry with a new one, in order to meet the alliance’s standards. Albania participates on a regular basis in international peace-keeping missions and NATO operations and needs tactical military aircraft, this country’s Minster of Defense Olta Xhacka, who signed in Washington the agreement for US military aid, said.

One of the most important institutions in the life of people from the small resort town of Strelcha in central Bulgaria is its cultural community center (an institution known in Bulgarian as “chitalishte” – literal translation – reading..

Radio Bulgaria already told you about Bulgarian musicians Theodosii Spassov and Hristian Tsvyatkov who made their first musical recordings on Antarctica . Now we would like to take a look at another Bulgarian innovation in the.. 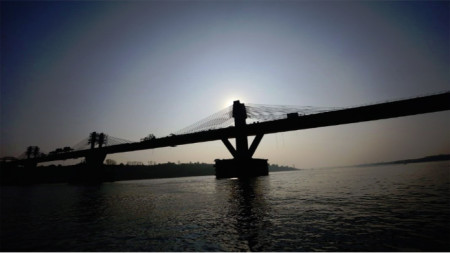 Bulgaria wants new bridges with Romania Bulgaria is prepared to invest EUR 50 to 100 billion in the construction of a third bridge over the Danube, said Prime Minister Boyko Borissov at the Munich Security Conference. At the talks on cohesion.. Radio Bulgaria already told you about Bulgarian musicians Theodosii Spassov and Hristian Tsvyatkov who made their first musical recordings..

Bulgaria wants new bridges with Romania Bulgaria is prepared to invest EUR 50 to 100 billion in the construction of a third bridge over the..

One of the most important institutions in the life of people from the small resort town of Strelcha in central Bulgaria is its cultural community..