2019 has been good, yet extraordinary year for Bulgaria’s tourism

2019 has been relatively good for Bulgaria’s tourism. This has been the year with the highest number of satisfied tourists. On one hand, this was due to the lower number of tourists spending their vacation along the Bulgarian Black Sea coast as compared to the previous year. One the other hand, we have enjoyed a beautiful and warm autumn, unlike in previous years when torrential rain, floods and casualties had negative effect on this sector. Between January and mid October 95,000 more people entered Bulgaria as compared to 2018. It means that Bulgaria’s tourism has not slowed down as expected earlier, because this sector has shown good results in terms of the main parameter – the number of tourists visiting this country, the Director of the Institute for Analysis and Assessment in Tourism Rumen Draganov told Radio Bulgaria and added: The revenues from tourism have seen nearly 4% increase as compared to 2018. This id due to the price increase and the diversification of the tourism product. Indeed, we started 2018 with some worries and concerns related to the comeback of competitive markets such as Turkey, Egypt and Tunisia. Each year an average of 36-37 million foreign tourists visit Turkey, whereas this year the number of foreign tourists visiting this country is expected to exceed 50 million, which means that Turkey has been working very hard to attract tourists. Meanwhile, the bankruptcy of Thomas Cook had negative effect on Bulgaria’s tourism and the other tourism destinations at the end of the summer season. In other words, 2019 has been a very good, yet an unusual year for our tourism sector.

In Rumen Draganov’s view, the financial effect of Thomas Cook’s bankruptcy on Bulgaria’s business (hotel keepers, airport operators, food industry, etc.) cannot be estimated precisely, because the process of bringing claims to tour operators from the Thomas Cook conglomerate will take at least one year. According to preliminary estimates of Bulgarian hoteliers, the business entities in this country will incur losses ranging from several thousand Euros to 1.5 million EUR. Will Bulgaria succeed to offset the number of foreign tourists through other tour operators?

Well, all I can say is life goes on. None of the several million tourists, who were clients of Thomas Cook, will stop living. These people will continue to travel. The question is who will replace this large tour operator and how it will be done? We can say for sure that the online tour operators and all digital platforms will have stronger presence on the tourism market in the future at the expense of the traditional tour operators. However, there are nearly 350 large tour operators in Europe, which will continue working with tourist destinations like Bulgaria. I personally do not see any serious damage due to the withdrawal of such a large tour operator from the market.

The number of tourists visiting Bulgaria in the forthcoming winter season is expected to see 3% increase year on year, Rumen Draganov went on to say and added:

We are expecting to welcome nearly 1.6 million foreign nationals in Bulgaria between December 22 and March 22. Nearly 220,000 of them will come for snowboard and ski tourism. However, many festivals related to the Orthodox calendar and other events such as the International Festival of the Masquerade Games Surva in Pernik, which attracts nearly 6,000 people, will take place in Bulgaria during that period. In other words, many events happen apart from the traditional winter sports. A large number of tourists visit Bulgaria for cultural tourism in urban space. These are mainly users of low-cost airlines who have contributed significantly to the growth of Bulgaria’s tourism in 2019. The number of trips to Burgas and Varna airports went down, but meanwhile we have witnessed an increased traffic via the Sofia Airport and new flights to the Bulgarian capital. The cultural tourism in urban historical space, the Balneology and Spa tourism, the hunting tourism, the extreme, the rural, the culinary, the alternative and the youth tourism are the fast growing sectors in tourism, which attract more and more tourists to this country. 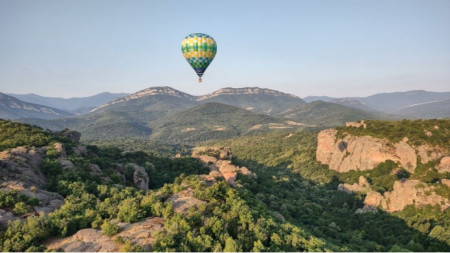 Flights with hot-air balloon over the Belogradchik Rocks became very popular this summer and the active tourist season ended with a unique Balloon Fiesta at the end of September. More than 10 hot-air balloons from several countries rose.. Taste Bulgaria to know and love it

Rural tourism in this country has been gathering pace during the pandemic, and it goes hand in hand with gastro tours in combination with slow travel. Every part of the country has its own typical food and recipes which are passed down from..

Rzhana Mountain - a place you easily fall in love with

Immersed in the hugs of the little-known Rzhana Mountain, the Nativity of the Mother of God Monastery tells us a story of a preserved medieval legend. Its church with seven altars, turned into seven chapels and dedicated to seven Bulgarian..