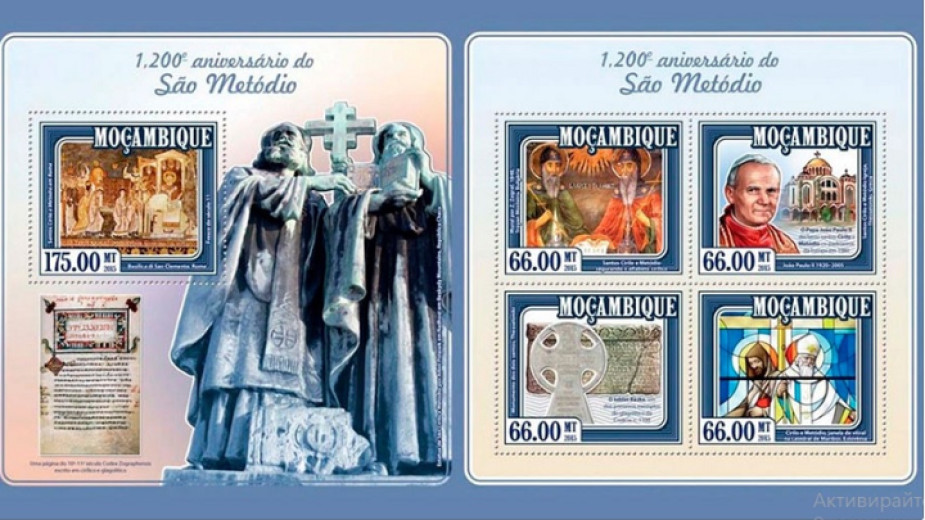 Even if it may seem incredible, it is a fact that in 2015 the Republic of Mozambique issued several postage stamps and a collector's envelope with the images of Saints Cyril and Methodius. The occasion then was 1,200 years since the birth of St. Methodius. The images on the stamps are very interesting, including a fresco from the Troyan Monastery, a stained glass window from a church in Slovenia, a memorial cross from Thessaloniki. The authors of this series use artifacts from various Slavic countries and through these symbols show the work of the Slavic educators, which is revered not only by the Slavs, but also by the whole Christian world.

"The stamps from Mozambique are a block of four stamps, a separate stamp, as well as a collector's envelope,” Assoc. Prof. Veselka Zhelyazkova from the Cyril and Methodius Research Center at BAS has told the BNR. “The first stamp of the block reproduces one of the most famous murals with the images of the Holy Brothers Cyril and Methodius – the one from the Troyan Monastery. It is the work of iconographer Zahari Zograf, considered the founder of Bulgarian secular painting. The next stamp presents the images of the Slavic educators on a stained glass window, which is located in the ancient church of St. John the Baptist in Maribor, Slovenia. Another stamp from this block contains two images - a memorial cross in honour of the holy brothers, which is located in Thessaloniki, as well as a photo of the Baška tablet from the end of the 11th and the beginning of 12th century – one of the oldest preserved Glagolitic monuments. In addition to this block of stamps, there is a separate stamp showing a monument to Cyril and Methodius in the Czech Republic, erected in 1931. In the upper left corner of the stamp the famous 11th-century fresco ‘Sts. Cyril and Methodius in Rome’, which is located in the Church of San Clemente, is shown.”

The connection between the work of the first Slavic teachers and the distant African country is precisely the apostolic letter of Pope John Paul II, with which in 1980 he declared St. Cyril and St. Methodius co-patrons of Europe. With this act, the creators of the Bulgarian alphabet received well-deserved recognition in the Catholic world and nearly 24% of Mozambique's population is Catholic.

"The Slavic teachers are a symbol of religious and cultural unity in Europe and in the world - proof of this are the two series of postage stamps with their faces, issued over the years by the Vatican," Assoc. Prof. Veselka Zhelyazkova adds.

"One of the series is from 1963 and it marks the 1100th anniversary of the beginning of the mission of Cyril and Methodius among the Slavs. By issuing these stamps, the Vatican wants to emphasize its participation in the Great Moravian events. On two of the stamps the images represent frescoes painted in the Basilica of San Clemente by Pietro Racini in the 18th century. The inscription reads ‘Sts. Cyril and Methodius – Slavic Apostles.’ The second series of the Vatican consists of three stamps put into circulation back in 1985. They point out the religious and educational work of the Slavic apostles, blessed by Pope Adrian II. The images are interesting because they are created in a modernist aspect. They are author's works and on one of them St. Methodius is seen in the robes of a Catholic archbishop with a typical hat and scepter. The third stamp from the Vatican is also interesting, as it presents the Holy Brothers Cyril and Methodius as co-patrons of Europe, and next to them is seen St. Benedict, who was proclaimed Europe’s patron in 1964." 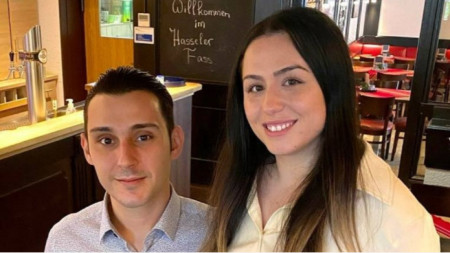