Mastercraftsman Mincho Todorov: Wood carving is authentic only when done by hand

The skillful craft of bringing a piece of wood back to life and giving it a totally new meaning is buried deep into the roots of Bulgarian culture. Perhaps the reader has already figured out that the subject of this writing is about wood carving. Skillfully carved ledges and panels bring beauty to numerous Bulgarian homes. Aside from being parts of the interior, the elegant threaded elements can serve their own function as well.

The mastercraftsman of this story, Mincho Todorov, works by that rule:

“Many wood carvings are being made and of great variety too, but not many people can be found who are able to craft functional objects in a truly masterful way – by hand, with details, big and small forms,” says the craftsman. “If it is a chair, it should be comfortable, if it is a mirror, it should be dealt with with care not to be broken, while for the making of a table its sturdiness is most important”.

Another requirement for an authentic wood carving is that it should be done by hand and not machines since they can be only used for the preparation, Todorov believes.

Mastercraftsman Mincho Todorov has kept his first ever wooden handiwork until today:

“I had made an image of a mummer since I am from a region where the mummers (“kukeri” in Bulgarian) are honoured by the people (the town of Pernik, located near the capital, is famous for the Surva festival). My grandfather has made many Surva and mummers-related ceramic sculptures. I used to love drawing kukeri and making wooden ship models when I was little. I must have been about 5 or 6 years old back then and these were the first items I have carved from wood.”

A painter, a ceramic artist, a woodcarver and a successful pedagogue, Todorov helps children from various ages to get familiar with the history of these arts, to develop their boundless imagination and to create something of their own by hand. He can never forget his first time working with youngsters as their teacher: “My first contact with children was very interesting. During the refugee crisis in Bulgaria from a few years ago, I was invited to teach painting to the refugee children. Imagine a person who has never communicated with children, to start working with 150 kids each day. I think that the oldest ones were about 7-8 years old. I could not bring them any clay since I could not get enough for everyone. For that reason, I was bringing them plasticine. There were dozens of children who had never seen plasticine. After understanding what it was, they were so happy that they were hiding it in their clothing so that they could have something to play with afterwards.”

His work with children, but most of all, the birth of his own child, provoked Mincho Todorov to start making small wooden toys, safe for the young discoverers – without any sharp edges and miniature details that are easy to swallow. The figures that the craftsman makes are devoted to different animals, but the most important part is that they are made from real wood and not from all sorts of synthetic materials that are most frequently used for producing children’s toys nowadays.

Another passion of the talented artist is the crafting of prosphora seals. He admits that from the two known types – ecclesiastical orthodox and artistic – he chooses the latter ones since he stands by the uniqueness of each of his products. Due to the rich colouring and diversity of symbols, Mincho Todorov compares them to the Bulgarian folklore costumes - one can guess from which region of Bulgaria they come from due to their characteristic details. Prior to making wooden bread seals, the mastercraftsman spent many years in trying to find out more about them and the specifics of their workmanship. He receives help mostly from talking to the elderly people from numerous Bulgarian villages since research on this type of seals is scarce.

Gold and whatnot diggers go out on a treasure hunt - be it gold bars, ostrich feathers or miniature screws, but very few of them settle on the beach to wait out the wind. Wind hunters, on the other hand, patiently sit on the sand and..

Megan Fox is making a film in Bulgaria

Hollywood actress Megal Fox has been in Bulgaria for two weeks, as she is taking part in the shooting of Till Death at New Boyana film studios. Producer of the film is Jason Carvey. It is not clear when the film will be released, as shooting.. 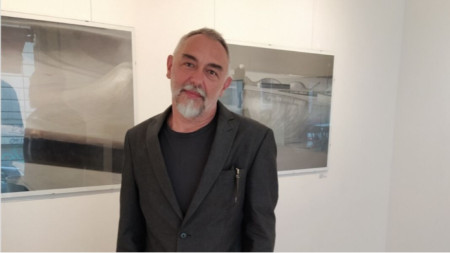 Stoyan Yorgov chooses to present himself to the Bulgarian audience with the colours of the white-black range – that special light, from which the hot desert air trembles before your eyes, and your skin shivers from the salty coolness of the..