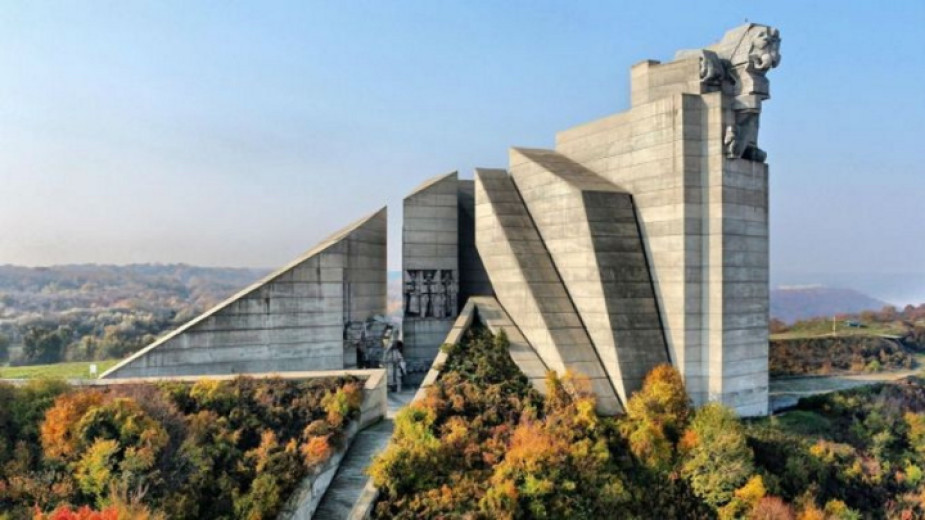 People in Shumen (southwestern Bulgaria) say, and with justifiable pride, that that is where Bulgaria begins – because of the first two capitals of Bulgaria, Pliska and Preslav, and also because of the Madara Horseman rock relief. That is the reason why, in 1977, a decision was made to erect a monument dedicated to the then forthcoming 1,300th anniversary of the founding of the Bulgarian state. The monument was created by sculptors Krum Damyanov and Ivan Slavov.

The monument was inaugurated on 28 November, 1981. It depicts the most important moments in the history of the First Bulgarian Kingdom (681 - 1018), presenting the Khans Asparuh – founder, Tervel – the first Bulgarian diplomat, awarded the title kaisar (caesar) by the Byzantine emperor, Krum – legislator, Omurtag – builder, Prince Boris – baptizer, Tsar Simeon the Great and the men of letters Kliment, Naum and Angelarius. In addition, there are colour mosaics and fragments of sentences, words all people in the country are familiar with, such as: “Even if a man lives well, he dies and another one comes into existence.” And above them all, at a height of 50 metres towers the figure of the lion – a symbol of Bulgaria’s strength and vitality.

Rusanka Tsaneva is the first tourist guide appointed at the Founders of the Bulgarian State monument in Shumen. Her coworkers call her the “human monument”. “I have graduated from a French-language school and have three years of training as a tourist guide in Varna,” Rusanka Tsaneva says. “I had had practice at two museums when I applied. They did an audition then – out of 20 applicants they selected 5-6 and I was approved. Actually, the first time I saw the monument was a week before it was inaugurated.”

How have the visitors changed through the years, their interest, their questions?

“To begin with we worked with a passion, and we even infected the foreigners with it – as I spoke the interpreters interpreted my words with the same kind of emotion. I shall never forget the applause of visitors from Sweden, from Russia. In the past 10 years or so people have been travelling a great deal, they have seen all kinds of things. I can see it in their eyes – they want to find out so many things. I think that technology, digital devices provide a wealth of information and we should work on that.”

In November 2021the remarkable monument towering over Shumen, which has come to be perceived as the town’s symbol, will mark 40 years since its official inauguration. There have been many changes through the years, many corrections to the figures, and they are most visible in the lion: What does the monument in Shumen have to hide?

“People think there is something hidden in the figures, that they can climb up them etc. There is nothing hidden! These concrete figures play a functional rather than an artistic role – they prop up the statues, and the mosaics were mounted on them.” Despite its intricate symbols, the monument has been a popular site from the very start. “People started coming here from day one – first they would lay flowers and wreathes, then the pigeons took a liking to the monument and started nesting there. It is cold and windy here so the pigeons left but the people – from Israel, France, from the Scandinavian countries – kept coming by bus. There will be fewer people now but there will be individual visits and we have to adapt to the new situation.” Tourist guide Rusanka Tsaneva says.

A 30-percent rise in the number of foreign tourists to the Bulgarian Black Sea coast was marked in the first half of June in..

The national exposition of arts and crafts in Oreshak village near Troyan is marking its 50 th jubilee today with a retrospective exhibition “Tradition..