But how durable can the success of a party be, with a leader who is a TV star familiar to generations of Bulgarians? In these years his shows have grown to be a principal source of information for thousands of our compatriots forced to leave the country as part of the wave of economic migration. What other factors can explain the fact that he has been the bombshell of the 4 April elections for parliament?

“Slavi Trifonov knows full well that a Balkan-type aura, especially outside Bulgaria, is a way to keep the bond with your home country intact when you are far from home,” sociologist Parvan Simeonov from Gallup sociological agency says. “Just take a look at the music channels from the former Yugoslavia. Balkan music is a conduit for transmitting a feeling of nostalgia for the place you were born, and it has turned into a cultural bridge. Slavi grasped this by just looking at other Balkan nations. He has also grasped the importance of another factor – that the share of Bulgarians living abroad within the community is growing.”

According to Parvan Simeonov, the structural reason why he got such a high percentage of the votes is that people are not happy with the state Bulgaria is in. In this sense the votes for ITN could well prove to be a not too durable tendency, unless its leader continues as an anti-system player. The big losers in the election race abroad are the participants in the current coalition government and their opposition – the BSP (Bulgarian Socialist Party). This has its logical explanation, Parvan Simeonov says:

“As a general rule Bulgarians living abroad have no love for parties from the status quo because there are two reasons for you to be living in another country. The first – that the people in power have never done you any favours, and the second is that you are studying at university abroad, so you are more open-minded and you too are against the status quo. Needless to say the BSP performed dismally abroad, in Bulgaria too their performance was below expectations. One of the reasons was Covid-19 which stopped many of the seniors from coming out to vote. Slavi Trifonov gambled on Covid denial rhetoric, and his campaign was mostly among young people which helped him attract this kind of vote. Taking a look at the tendencies in the long term, the anti-system vote from abroad is going to remain a durable tendency.”

On election day the vote by Bulgarians abroad will be remembered for the record results for some of the parties, but also for the unprecedented voter turnout, with more than 180,000 people casting a ballot. The large number of voters and the slow pace of work of the section election commissions formed huge queues in front of the polling stations in many European cities. The fact that there is a limit to the number of polling stations in non-EU countries also had its effect on the process. For example, the 35 polling stations (which is the maximum number allowed) proved to be highly insufficient, especially in Great Britain. Bulgarians living in the UK had warned there would probably be problems on election day and demanded that amendments be made to the election code, including the designation of a constituency specifically for voters in other countries, more polling stations in non-EU countries, plus e-voting and postal voting. Parvan Simeonov describes many of them as dangerous clichés because:

“Postal voting is not safe in terms of secrecy of the vote. What guarantee is there that a person who voted by mail or electronically didn’t have someone standing over his head? The introduction of e-voting or voting by mail means interfering with the election procedure in a colossal way, something I do not support. Especially knowing our fundamental suspiciousness of the election process in this country. Increasing the number of polling stations in non-EU countries is a question to be decided by a concrete decision Bulgaria has to make – does it want to allow massive voting in Turkey or not?”

As to having a designated constituency for voters outside Bulgaria, such a constituency would make it very difficult to set the cost of the mandate. What is more there is no reliable statistical information on the number of Bulgarians living in other countries. Searching for the key to the formation of a ruling majority

After the State Gazette published the election results and the names of the new members of parliament, and President Rumen Radev issued a decree convening the 45 th National Assembly on 15 April, attention is now focused on the possible.. One week after elections the political configuration in Bulgaria remains unclear

After the refusal of the current ruling party GERB, the mandate to form a government goes to TV showman Slavi Trifonov whose party "There is Such a People" (ITN) became the second political force in Bulgaria after the elections. In an.. 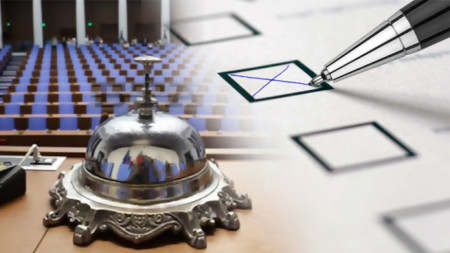 Parliamentary elections give rise to questions instead of finding solutions

So where do we go from here? Political scientists and analysts reflect on this question after the Parliamentary elections in Bulgaria held on April 4. According to all preliminary forecasts, this year’s general elections were going to be unusual..