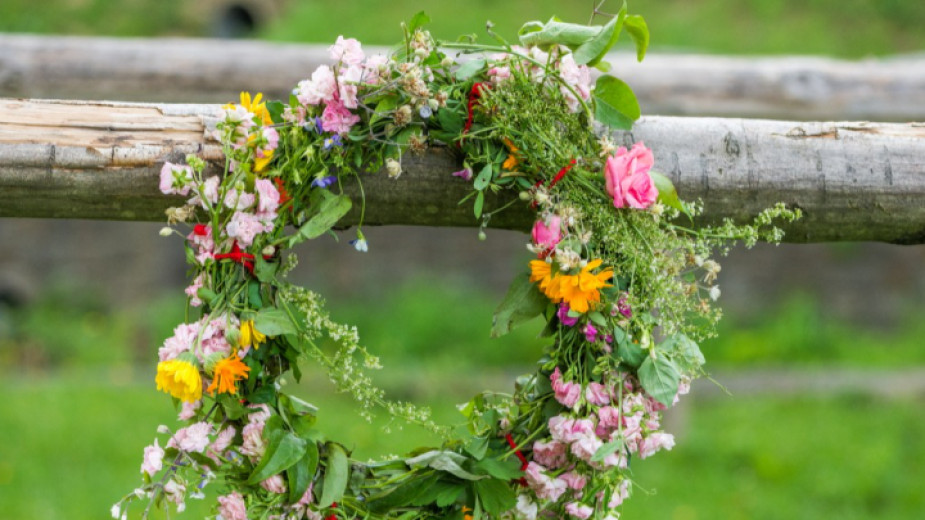 On June 24, the Orthodox Church celebrates the Nativity of St. John, the Forerunner and Baptist of the Lord. June 24 is also one of the biggest Bulgarian folk holidays − Midsummer's Day known here as Enyovden (Enyo’s Day) dedicated to herbs, water, sun, health rituals. We also associate it with the former premarital divinations with bunches of flowers. The name comes from a modification of the name John − Ivan, Yanyo, Enyo. Hence the different names in different areas Yanevden, Yanovden, Ivanden, Ivanden, Ivan Letni and others.

The most common and enduring belief is that herbs picked before sunrise on Enyovden have a great healing power. Modern herbalists, as well as people who use medicinal plants in their daily lives, really get up literally in the middle of the night and go to their favourite places to pick Enyovden herbs. An object of healing and protective properties is Enyo’s wreath, which the girls once weaved with herbs. As well as the flower bunch which some are still trying to make to this day. According to popular belief, it must contain 77 and a half herbs. Such is the number of diseases - 77 are known, and "the half" is unknown. Folk healers know which are these 77 herbs for known diseases, and the “half” they are supposed to pick with their eyes closed - a stalk that accidentally falls into their hands. This bunch of herbs is dried and stored, it is believed that it can cure all diseases.

In the folk songs that accompany the custom, often the main character is the mythical Enyo who goes to pick herbs.

A popular legend has it that the Sun bathes in living water early in the morning on Midsummer's Day and dances with joy. Then it takes its long way to winter. Everyone who manages to see this fabulous dance is blessed by the Sun with health. All rivers, lakes, springs are also blessed. It is said that on Enyovden water begins to flow even from dried-up springs. Therefore, it is considered good for everyone to go to a natural water source and take a bath, roll in the morning dew or at least splash their face with water.

In many places today people re-enact the old custom called “Enyova bulya”, which ends with the naming of floral bunches and premarital divination. The traditional Enyovden fires are also lit - to increase the power of the "heavenly fire". Related to the magical power of this time of year is the belief that on the night before the holiday, wanderers and fraudsters go around the fields to steal other people's fertility. And over the places where there is hidden treasure, ghostly fires appear. But the main meaning of the holiday is the care for human health - one of the greatest values for Bulgarians in all historical epochs.