Photo: president.bg
Achieving progress in the process of European integration of the Western Balkan countries was the focus of a meeting in Sofia between Bulgarian President Rumen Radev and European Neighborhood and Enlargement Commissioner Olivér Várhelyi.  Bulgaria's Minister of Foreign Affairs Svetlan Stoev also took part in the conversation.
Radev said Bulgaria expects effective action from EU institutions to promote the values ​​of democracy and respect for human rights in North Macedonia. The President stressed that 120,000 Bulgarian citizens in North Macedonia are also EU citizens and Bulgaria relies on the support of the European institutions for the effective respect of their rights, according to the press office of the presidency.
Radio Bulgaria News    North Macedonia Olivér Várhelyi Rumen Radev 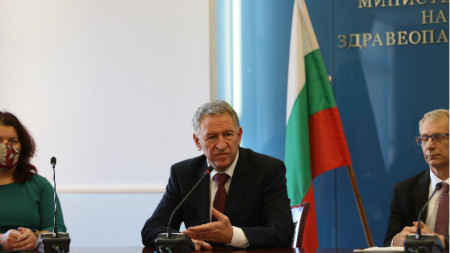 Bulgaria’s government will allocate EUR 6.5 million for the purchase of child-friendly Covid-19 tests. We want to provide Covid-19 tests for all Bulgarian children from 1st to 4th grade for at least one month, this country’s caretaker Minister of..

2022 will be marked by the Covid-19 pandemic in Bulgaria, but not abroad where the coronavirus pandemic has already been contained. Bulgaria risks remaining an oasis of irrational thinking, Associate Professor Dr. Mihail Okoliyski, representative of.. Daily subsistence allowances for drivers conducting international cargo services will increase from EUR 27 to EUR 50. This is envisaged by amendments to the Ordinance on Business Travel and Specialization Abroad, published for public discussion. When..