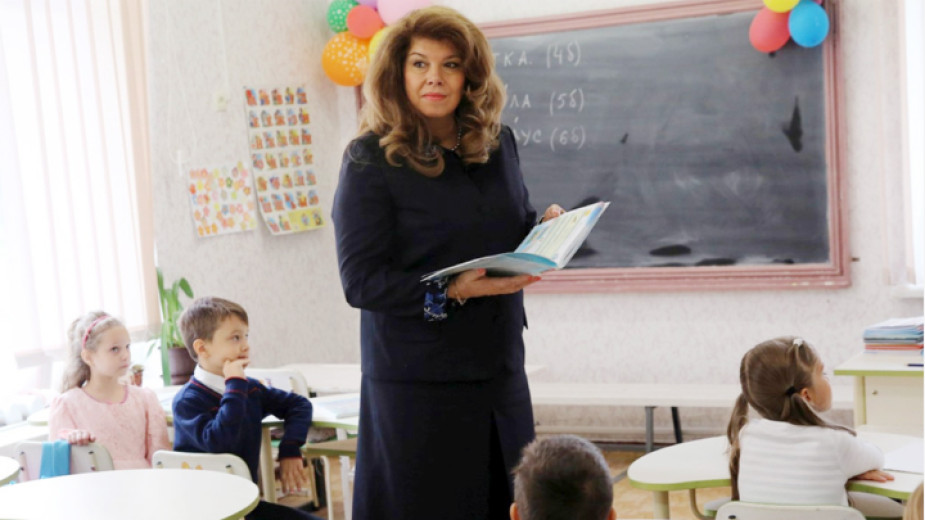 At the Bulgarian Theoretical School V. Levski in Kishnew

The lack of dialogue with the other two important institutions in the country – the National Assembly and the Council of Ministers, has prevented the implementation of many of the ideas of the Bulgarian President and Vice President regarding the policies for Bulgarians abroad. This became clear from the interview that Vice President Iliana Iotova gave to Radio Bulgaria a few days after she and Rumen Radev received the trust of Bulgarian citizens to continue their work for a second term.

The conversation took place in an extremely difficult week, in which Bulgaria was shaken by two tragedies that took the lives of 9 Bulgarians in a nursery home in a small Bulgarian village and 45 North Macedonian citizens who died in a road accident involving a bus crash on the Struma motorway in Western Bulgaria. "Emotions are still very strong," said Iliana Iotova, expressing condolences to the relatives and friends of the victims: "This time the truth has to come out in full detail, no matter how cruel, and let's see who hasn't done their job. After finding out the truth, the appropriate measures must be taken to prevent such catastrophes from happening in our country. But I would take it a step further – this time let's see the culprits. Not to dilute the guilt throughout society, but to actually punish those responsible." Nearly 2 million, according to unofficial data, is the number of Bulgarian citizens living outside Bulgaria. They took an active part in the parliamentary and presidential elections during the year, stating the hope to see real changes in their homeland – observance of rules, functioning judiciary, quality healthcare, reduced corruption among civil servants, good pensions for their parents in Bulgaria.

"Many things lie ahead," says Iliana Iotova, who is in charge of the president's policies toward Bulgarians abroad. “The positive part of the last elections is that the Bulgarians abroad showed very serious activity. And this is a sure sign of how much they care about Bulgaria. And most importantly – Bulgarians abroad see a bright ray of change here. We must do everything we can as a country not to disappoint them this time."

A priority for the next term in office is the topic of the Bulgarian language abroad. One of the most serious tasks in this regard is the return of the maturity status of the Bulgarian language in France. This is not a deliberate decision by the French state, but a possible technical error. "And no one in our ministries has noticed this in order to signal in time and return the text. Now it is much more difficult, but we will have to work in this direction anyway," Iotova said.

"Unfortunately, the Bulgarian language has lost its place in many European civilizations over the years. We had years in which Bulgarian studies was a specialty in leading European universities. Due to our own nihilistic carelessness as a country and as people, we have lost these positions”, says Iliana Iotova and points to a striking example: “At the University of Budapest there are no classes in Bulgarian, on the other hand there are classes for studying Macedonian, whatever that means. You can place this topic in the context of everything that is happening in our relations with the Republic of North Macedonia. We have had positions that we have lost and there will be no easy and short way to their recovery. But we have to do it.”

As a success of her work, together with the previous government, Iotova acknowledges the opportunity for children who have graduated from Bulgarian schools abroad to apply with their grades directly in Bulgarian higher education institutions. "This is done with the noble goal of returning these children to study in Bulgaria and, God forbid, to stay here and keep the language. This system needs to be further improved. The next step is how to make foreign citizens learn Bulgarian as well. This is the biggest challenge that is a matter of public policy." In terms of foreign policy, contacts with the authorities in Moldova are extremely important in order to preserve the administrative integrity of the Taraclia region, where a concentrated Bulgarian community lives. A possible separation would lead to a loss of opportunities to learn Bulgarian as a mother tongue, Vice President Iliana Iotova said in an interview for Radio Bulgaria. How does the science of tomorrow integrate the knowledge of all scientific branches to warn, find cures and seek salvation? Syncretic new sciences -..