An 80-centimeter star is now shining on top of the Christmas tree downtown Sofia. The living coniferous tree is 13-meters high and has been decorated with over 10,000 white lights, snowflakes and balls. Two large glowing deer have "found shelter" under the Christmas tree to the delight of passing children. The symbolic beginning of the festive euphoria was given with a magnificent fireworks display on December 1 in the presence of the Olympic gold medalists from the Bulgarian Rhythmic Gymnastics Ensemble.

The whole park in front of the National Palace of Culture in the center of the Bulgarian capital city has been beautifully decorated. From December 9 to 23, a “Christmas town” will be located there, offering the residents and guests of Sofia a festive open-air bazaar and a cultural program.

Traditionally, on the first day of December, many Bulgarian cities lit their holiday decorations. The Christmas tree in Plovdiv is made by a factory in the nearby town of Rakovski, which is the only producer of Christmas trees in the Balkans. Numerous lights twinkle on 4,000 green twigs of the 13-meter tree. A special corner, made by the graduates of the National High School of Performing and Screen Arts invites Plovdiv residents and guests to take pictures among the holiday decorations and together with Santa Claus, BNR-Plovdiv has reported.

December is the most magical month for children who are looking forward to the visit of the good old man and are ready to surprise him with beautiful things they have created. In Blagoevgrad, for example, on December 6, the “Elves Workshop” will open its doors, where children will make Christmas cards and decorations. The initiative belongs to the Dimitar Talev Regional Library and is part of the festive program of the Municipality of Blagoevgrad.

With a concert entitled "Christmas Stars" and with the participation of many children from kindergartens in the region of the town of Sredets, a Christmas tree was lit. This was the beginning of a competition for the most beautiful Christmas decorations. Offices and houses will be awarded in the categories "Traditional", "Innovative", "Original" and "Fun" decoration. St. Nicholas Bazaar with traditional delicacies and other surprises will also attract visitors and on December 23 carolers from kindergartens in Sredets Municipality will present their greetings and wishes, BNR-Burgas has reported.

The 15th edition of the competition "Let's Decorate Burgas" has started by the sea. December is the time to invite the festive spirit, organizers say. "Let us illuminate Burgas with light and hope!" is the motto of the competition, which encourages creativity and personal initiative of the citizens of Burgas.

More than a hundred living fir trees will be the focus of the decoration of the central part of the city. Their branches will be decorated and a special system of spotlights and sound at the base of the trees will take care of the good mood and festive atmosphere in the center of Burgas, where guests and citizens can immerse themselves into the emotion of the holiday. Inspired by the Christmas spirit, each of us can create magic by giving a book to a child. For the second year, the National Network for Children is conducting the campaign "A child expects magic! Become a magician – give them a book.”

There are many children who dream of receiving a book, but it never happens. 20 percent of children in Bulgaria do not have books suitable for their age, Maria Brestnichka from the National Network for Children has told BNR-Varna. With the help of civic organizations, they have gathered the wishes of children from all over the country. So far, benefactors have fulfilled the wishes of over 900 children, but new ones are constantly coming in and are immediately published on the campaign platform. And the big goal is to have as many children's smiles as possible on Christmas. 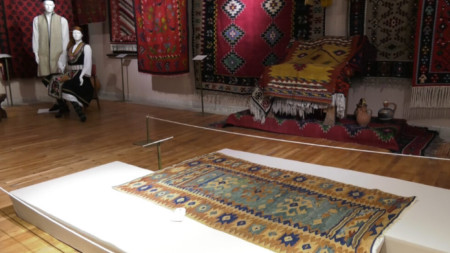