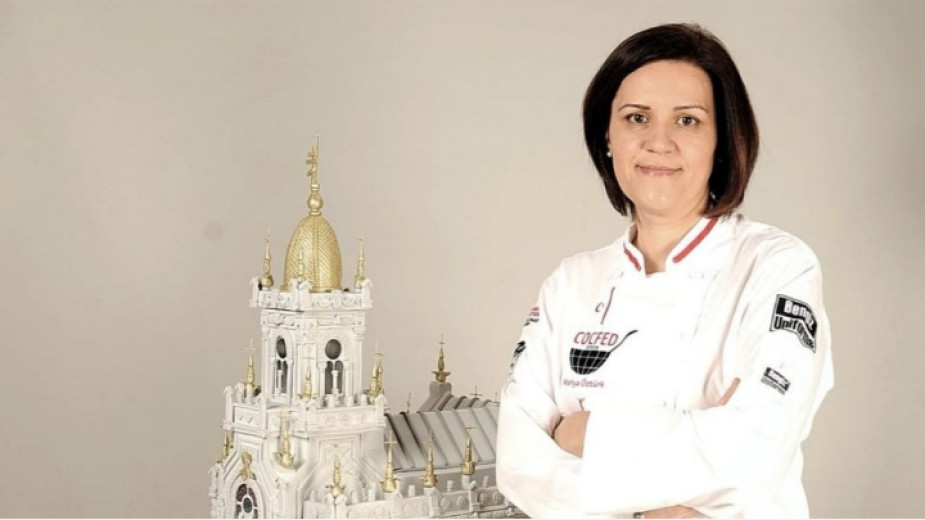 The Iron church St Stefan in Istanbul, the Sofia synagogue, and the paintings of Vladimir Dimitrov-the Master have at least two things in common. Besides being iconic landmarks of Bulgarian culture, they are all... made of sugar. And the red thread connecting the three is a Bulgarian woman who has lived in Istanbul for 20 years - Mariya Ozturk.

Born in Gabrovo, Maria was very young when she first took interest in art and crafts. She graduated from the Art School in Tryavna, where she mastered the expertise of woodcarving. She graduated from University of Veliko Tarnovo "St. St. Cyril and Methodius" with a degree in "Sculpture" and "Pedagogy of Fine Arts", and subsequently started working as a teacher in her hometown.

Mariya met her Turkish husband through a social network application and even though she didn’t speak the language she decided to go and live in his country. For two decades now she has divided her life between Bulgaria and Turkey. “I started working at a conservation lab, restoring paintings and icons, says the Bulgarian about her first job in Turkey. – I worked with restorers from France, Bulgaria, Turkey, and Greece,” Mariya remembers. Her task was to retouch the canvases after the intervention of the restorers.

Then the couple’s first child was born, and the happy event brought a change in the course of their lives. It all started when the boy turned two and Mariya made her first cake. Of course it needed decoration, and one thing led to another, so soon the young artist was captivated by the art of cake decorating. Not long after that confectionery became more than a hobby. The Bulgarian sculptor became a member of the World Association of Chefs. In order to be a member one must join first one of the Associations’ federations.

„In Tasfed Federation I was the only foreigner since 2017, says Mariya. - Every year, this federation holds a gastronomic festival in Istanbul, which also organizes special trainings for chefs who wish to judge at various culinary festivals and olympiads.”

Her success at the International Cake Exhibition in Birmingham in 2016, where Mariya's works were awarded gold and silver medals, gave her the idea to organize an event where she could present the work of confectioners-decorators to a wider audience.

So 6 years ago she did realize her special project "My Bulgaria", where sugar decorators presentеd their works on Bulgarian themes. She herself created a sugar model of the Sofia Synagogue. The other participants did a sugar replica of patriarchal Cathedral of St. Alexander Nevsky in Sofia, and the images of the Bulgarian rulers Khan Asparuh and Tsar Simeon I.

A few years ago, Mariya Ozturk recreated from sugar one of the all-time masterpieces of Bulgarian art: the oil painting "The Girl with the Apples" by Vladimir Dimitrov-the Master.

Another of her sugar creationsattracted a lot of attention both in Turkey and in Bulgaria. She sculptured an exact miniature sugar model of the Bulgarian Iron Church St. Stephen in Istanbul, which is an important symbol of Bulgarian spirituality. The occasion was the official opening of the renovated church in 2018. „The architect who led the restoration of St. Stephen gave me the original architecture plans of the church. Today this model is on display in a special glass box at the shopping center of Gabrovo, and I am very happy that I managed to preserve it,” says the Bulgarian.

Mariya divides her time between her confectionery studio, being judge or participant in various competitions all over the world, or traveling to her next master class. Bulgaria, Germany, Switzerland, Singapore, Saudi Arabia, Qatar, Jordan, Iran are just some of the countries she has visited recently to present the sweet art of sugar modelling.