Bulgaria’s top female tennis player Viktoriya Tomova has made her official debut in the WTO top 100 rankings, climbing 9 notches to reach 99th position. This is due to the fact that the 27-year old tennis player from Bulgaria reached the semifinals at the tournament in Grodzisk Mazowiecki Tournament in Poland.

“I have important weeks ahead of me during which I have to play well and make it to the US Open main draw. I am close to doing that,” Tomova said.

Viktoriya Tomova is the 9th female tennis player from Bulgaria to have made it into the WTA top 100. Bulgaria’s football champion Ludogorets and HJK Helsinki drew 1:1 in the framework of matchday three of the group stage of the Europa League 2022-2023 football tournament. Ludogorets took the lead, as Matias Tissera scored in the 10 th.. More than 3,500 participants expected at the Sofia Marathon on October 9

More than 3,500 applications have been submitted for participation in the Sofia Marathon, which will be held on Sunday , October 9, the organizers of one of the most popular sports events in the capital announced.  About 500 people will.. 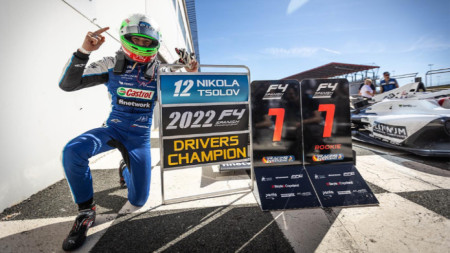 Bulgaria’s racing driver Nikola Tsolov won the title in the Spanish Formula 4 championship. The racer, who will turn 16 in December, became champion in his first season in F4. Nikola Tsolov secured his title with one third and two second..

Bulgaria’s football champion Ludogorets and HJK Helsinki drew 1:1 in the framework of matchday three of the group stage of the Europa League 2022-2023..