The funding under the Recovery and Resilience Plan, earmarked for remediation of residential buildings, amounts to 1.4 billion Leva, a sum that could be sufficient for retrofitting about 1,000 big multi-storey buildings in the country. Under a national programme for retrofitting, and with European funding, around 3,000 buildings have been renovated in the past 6 years, or under 1% of the housing stock in the country. An average of around 200 buildings a year are retrofitted, free of charge. At the same time, there are 66,000 residential buildings that are in need of renovation, according to data of the national housing stock strategy. Many of them are prefabricated multi-apartment residential blocks, whose construction began in the 1950s.

And if you are thinking that buildings of this kind are to be found only in countries that were once part of what was then called the socialist camp, you would be wrong, because the first such buildings were put up in USA, and in Europe – in Great Britain and in Germany.

“The first residential building of this kind was built in Bulgaria in 1958 in Sofia’s Zapaden Park (West Park) residential area, and it is still in existence,” says Alexander Predov, whose hobby is to build small-scale models of prefabricated apartment blocks out of paper. It was with a model of this first prefabricated building that he started his collection. “I had decided that my first series of models would be of emblematic buildings with historic and cultural significance. It does not actually look like a prefabricated building because it has a tiled two-sided sloping roof.” Alexander does not subscribe to the reservations people have regarding the strength and durability of pre-fabricated residential buildings which are often dubbed unsafe 50 years after they were built.

“There are risks, but they are mostly because of poor maintenance. The big problem that could have more serious consequences are the joints between the panels. After a certain time, they need to be checked and processed to keep them in good shape.” Alexander has no qualms advising foreigners or Bulgarians coming from another city to buy or rent an apartment in a prefabricated building, but, of course, he says it is a personal choice:

“Why shouldn’t I? One-quarter of Bulgarians live in prefabricated apartments, there is nothing wrong with that, and nothing to worry about. It is a matter of personal choice, because they will need to make an effort to maintain and renovate the building.”

A childhood memory was what gave Alexander Predov, a film and ad prop man, the idea to start making small-scale models of prefabricated apartment blocks. In 2017, Alexander found that books for small-scale models were still on sale, and so he bought one – of a house from Bulgaria’s Revival period – for his son. But putting it together proved to be a difficult thing, and after months of trying, they gave it up. On the following day he took notice of a prefabricated building nearby, so he took pictures, and using computer software, made a blueprint and then a small-scale model. That was how the study of the construction of prefabricated buildings, and their replication in cardboard became his passion. The story of one of the paper models is really intriguing, and involves two prefabricated apartment blocks, one Italian sculptor and international acclaim:

“I have a model of an imaginary building. The idea came to me during the first days of the pandemic in 2020. One of the last photos I posted to a platform for photography before the pandemic restrictions were put in place was of apartment blocks 67 and 68 in Sofia’s Druzhba residential area. A few days later an Italian sculptor got in touch with me and asked me to send him the original. He said he’d been on the lookout for a such building such for a long time because a project of his called Enduring Man – a kneeling human figure - resembled the view from the apartment blocks. He asked me for the photographs and a week later he had made a collage which I used to make a paper model. With that collage, and my model, the sculptor had several exhibitions in Italy during the time of the pandemic. We have kept in touch, he is currently arranging for our participation in another exposition.” 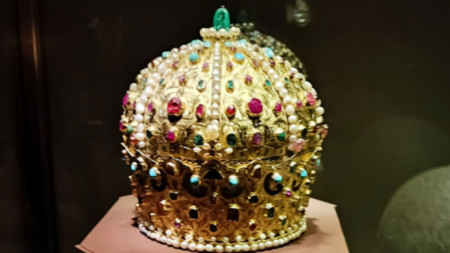