Some people are blessed with a long and happy life, others pass on before their time. But few leave an imprint on the generations to come – those who have touched the hearts of friends, relatives, of their contemporaries. On January 30 we mark 100 years since the birth of folk singer Boris Mashalov – a paragon of artistic immortality. Even though within these 100 years, his life spanned only 48, 25 of them he dedicated to singing. Few can say nowadays they have heard him sing. But stories are still told of the magic he captivated audiences with, of how he played on the heartstrings, taking audiences on a journey of talent and tradition. His voice – “colourful” and beautiful across the entire range, tells stories that are joyful or sad, nostalgic or happy. Over the past few days, all national media have been playing his songs; friends and colleagues have been telling stories from his life.

Boris Mashalov was born in Sevlievo, Northern Bulgaria but his repertoire features songs from all folklore regions in the country. His father, Nikola was a tradesman who traveled a great deal and heard more and more new songs. His mother also sang. All six children – among them only one girl - inherited their parents’ talent. Financial and business setbacks took the family to Sofia. The men took up house-painting. Back in the days when they lived in Sevlievo they took part in wrestling contests, but that did not prove very lucrative. At the beginning of the 1930’s Boris was admitted to the Amateur Wrestlers Club and won many bouts in Bulgaria and abroad. During his military service he was a sailor. And that was when his talent made him so popular – he competed, he sang and came to be loved by one and all. At the close of that decade Boris Mashalov went to Prague to record popular hits for a Bulgarian gramophone record company. The owners decided to advertise the records with an improvised open-air concert. The singer performed some of his songs ending with his father’s favourite folk song. The audience was entranced. An elegant gentleman went up to Mashalov and introduced himself – Sirak Skitnik, writer, artist and first director of Radio Sofia, now the Bulgarian National Radio. At his invitation the singer, then 23, started taking part in the radio’s programmes with his songs.

“I was born when Boris Mashalov was no longer with us. To me, he was a voice on the radio and a character in the anecdotes my father and his brothers used to tell,” says Boris Mashalov, nephew to the singer. “I listen to his music not because we are related but because I genuinely enjoy and understand it. I think that is true of all of Mashalov’s fans – his songs are so good they reach out to you. There are several people bearing the same name in our family. His brothers Dimitar and Seraphim named their own sons after him. There is a Boris Mashalov living in USA – grandson of the singer. There were many musicians in my grandfather’s family and they were all in love with folk music. Their other passion was wrestling. My brothers also inherited this passion and some of my cousins. I myself am a professional wrestler. I have been national champion and runner-up in the Balkan championship. My father, Mihail was one of the founders of the sports wrestling clubs in Bulgaria. He is also the first international referee in the country. I remember how his brothers and my aunt used to get together often and have a good time. They would sometimes listen to songs performed by Boris Mashalov on the radio and that always triggered off stories about him – invariably good-natured and entertaining.”

Together with the groups, set up by the Ministry of Culture, Boris Mashalov toured Bulgaria many times. They say that everywhere he went the audiences eagerly looked forward to his performances and he sang several encores. He had

many fans around the world – in Germany, France, Hungary, Italy, the countries of the former Yugoslavia and the former USSR, Albania and even faraway China. In Bulgaria there are many performers following in his footsteps. One of them is young singer Anna Borissova, who organizes the folklore contest Nightingale from the North in Veliko Turnovo. According to the rules of the contest’s first edition, songs by Boris Mashalov have to be included.

“My interest in the unforgettable nightingale from the north, as he is known goes back to my early childhood, before I had even considered a professional career. I sang songs of his at my entrance exam for the Panayot Pipkov National Art School in Pleven. To this day I greatly admire his incredible repertoire. And I am still enthralled by his unique style and his beautiful, powerful voice. I love his songs – his Nikola Calling Out, Ting-a-ling and the emblematic Lamb Bleating which I myself recorded some time ago. The contemporary arrangement is the work of famous bag-pipe player Krassimir Kondov. We, young singers must record time and again and not just Boris Mashalov’s songs, but songs by other performers from our part of the country. In recent years the musical heritage of the other folklore regions has been popularized very actively, whereas the traditional songs from Northern Bulgaria seem to have taken a back seat. Their revival is a priority task I have set myself and I have been trying to involve colleagues as well. And I would like to invite all performers who love the songs from the Northern part of the country to take part in our song contest, whatever their nationality.”

“I will find the meaning in life again, for you, not for me. I don’t need so many things when you are next to me!, read part of the lyrics of the song Not for me, performed by the popular Bulgarian rock band B.T.R, guest musicians Kiril Marichkov..

Tangra was founded back in 1976 by Konstantin Markov and Alexander Petrunov. Many musicians have been part of this influential band. In 1990 the band ceased activities, but after a pause of more than 25 years, they have returned on stage. During.. 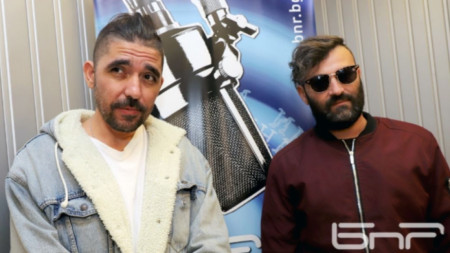 Indie rock band Jeremy? with a big concert in Dubai