Christiane Karam: I try to find a common language between different cultures 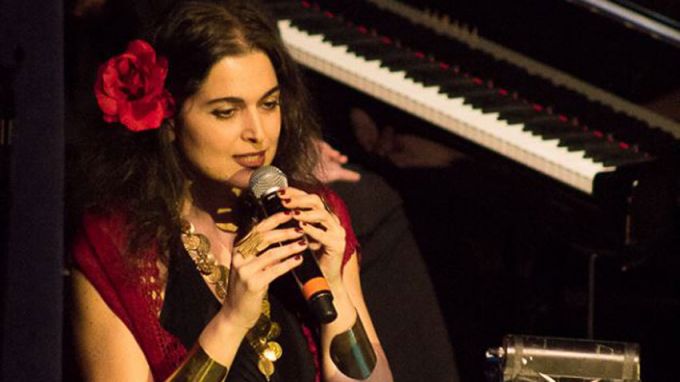 
Christiane Karam was born in Beirut which is where her father comes from. She started playing the piano at a very young age. She received the first lessons from her mother - an Armenian born in the Lebanese capital. Today she sings jazz, pop and rock, playing the piano and percussion. She graduated from the Berklee College of Music, where she now teaches. For six years she has been organizing musical events at the prestigious university. She is also the founder of a choir where we can hear singing together Americans, Europeans, representatives of the Middle East, the Balkans and all sorts of areas of the world. She studied Indian, African and other ancient cultures and she is the author of vocal works, classical and film music. She has been on the same stage with a number of famous artists. Especially she values working with Bobby McFerrin, from whom she learned a lot - for voice, music, rhythm, freedom of spirit. She first heard Bulgarian folk music in her childhood and inexplicably fell in love with it. In recent years, her teacher has been Binka Dobreva from The Mystery of Bulgarian Voices choir. This famous singer of Thracian folklore is also the godmother of “Pletenitsa” – the choir Christiane set up and conducts.

"I grew up in the midst of armed conflict and I can still remember the roar of bombs, she says. Therefore, it is important for me to bring people together, to create an environment in which they communicate, seek common ground between different cultures. In this respect, art has priceless opportunities. I am grateful that I am a musician. I believe musicians have a secret mission in the world - to unite people and to create beauty out of diversity", Christiane says. Her interest in various folk traditions appeared only later, but has dominated her daily pursuits ever since. She says it is a journey to her own roots, which are scattered around the world.

This year's festival which Christiane organizes was devoted to Armenian music . The first three days as usual were full of rehearsals, individual and ensemble activities. The gala concert of all participants started with Bulgarian music - the Pletenitsa choir and the dancers from the Ludo Mlado ensemble for Bulgarian Folklore based in Boston. "I must have Bulgarian music around me constantly, it makes my heart beat with joy," says the beautiful professor. On March 3, Bulgaria's National Day of Liberation, she wrote in her Facebook profile: "Happy birthday, Bulgaria!" About a month ago, Christiane visited our country for the fifth time. Here she already has friends and favorite places here. She actively works with her teacher Binka Dobreva. What would be the image of the traditional Bulgarian folk song if she had to depict it in a picture?

Chrisiane talks to RB's Albena Bezovska in a special interview for Radio Bulgaria which you can hear in the audio file.

Young maiden Dragana and the nightingale

One of the largest film projects implemented in Bulgaria is undoubtedly the Khan Asparuh trilogy. The team, actors and extras involved in filming the production in 1980 numbered over 100,000 people. The historical epic, directed by Academician..

The film "Here I am, Again" about the Bulgarian high-altitude climber Boyan Petrov was awarded the “ C ity of Bolzano” Golden Gentian Prize  at the 69th edition of Trento Film Festival . The film is a chronicle of..

May 7 is International Radio Day

On May 7, 1895, Russian physicist Alexander Popov showed for the first time to the Russian Physical Society in St. Petersburg his apparatus for transmitting and receiving electrical oscillations from distances without a wire. In 1899, Popov connected to..

One of the largest film projects implemented in Bulgaria is undoubtedly the Khan Asparuh trilogy. The team, actors and extras involved in filming..