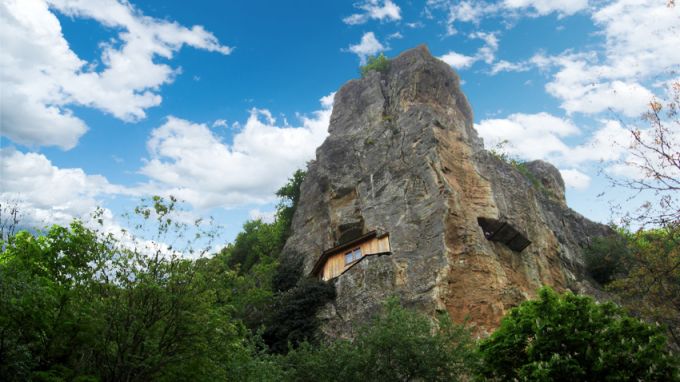 Once Rock-hewn Churches of Ivanovo at the Rusenski Lom River in North Bulgaria, attracted renowned representatives of Bulgarian letters and spirituality, while the tsars themselves were their patrons. The St. Archangel Michael Chapel near the village of Ivanovo, some 20 km away from the Danube town of Ruse is the biggest among these spiritual centers. It consists of around 20 small churches, chapels and cells, carved at different height in the rocks and linked by paths and stairs. It was founded in the early 8th c. by Joachim the monk, later on elected a patriarch. The marvelous frescos on the monastery’s walls, created by notable Tarnovo masters in the 13th and 14th c. present the development of the famous Komnenos and Palaiologos styles in these lands. There is also a great number of graffiti preserved. Nowadays only the Sv. Bogoroditsa /Mother Mary/ Church, a part of the monastery complex is open for visitors. Its mid-14th c. murals are considered top achievement of the Medieval Bulgarian and Balkan art.

“The monastery was active with monks till mid-16th c. and then during the Ottoman rule it gradually dwindled. Nowadays it isn’t acting,” says our guide across the rock-hewn complex Todor Petrov. “The whole rock monastery in the valley, situated on an area of some 5 km2 consists of churches /predominantly/, dormitories or warehouse premises and seclusion cells. The Sv. Bogoroditsa Church has been under UNESCO auspices since 1979 as part of the global cultural heritage. All murals here represent scenes from the Bible, depicting the last 7 days of Jesus on earth, or Maundy week, the way we, Orthodox Christians call it. Only conservation of the authentic murals has taken place, without any, even partial restoration. This church is the ‘youngest’ in the monastery, dated to the 1350-60. Tsar Ivan-Alexander was its donor during his rule in the period 1331 – 1371, prior to the Ottoman invasion. The monks thanked him by depicting his image to the left of the official entrance.”

Today’s entrance to the church was dug quite later – in 1936 – 38, by famous Czech scientist Karel Škorpil, one of the founders of the Bulgarian archaeological science. There used to be a long path on the rock’s surface, but unfortunately somewhere in the middle of the 16th c. it tore apart and collapsed – nowadays it doesn’t exist. The cliffs here are soft, susceptible to erosion, the guide says. Still, the murals have been preserved. Their plots reflect the influence of hesychasm, preaching ‘solitude, silence and muteness.’ “At the same time they exude the harmony of spirited human figures in a composition of many layers which combines the Orthodox canon with hesychasm,” Todor Petrov goes on to say. “When the hesychast monks came here, into this rock valley and also into the one close to Varna – of the Aladzha Monastery, they found numerous small natural karst caves, later on manually enlarged to the sizes necessary.”

The method used for the painting is the world famous Italian style, known by the name ‘afresco’, or simply ‘fresco’ – meaning ‘repeated painting on wet mortar’ – up to even 18 layers, depending on the thickness of the base. The paints used were mineral, extracted across the monastery’s surroundings. In the words of Todor Petrov, the lighting of candles inside the temple played a decisive role for the preservation of the range of colors. “Candles were made of wax and tallow through that period, all the way to the early 20th c., without being refined. During the burning process they evaporated, meeting with the cooled surfaces of the rocky premises. A small part of the candle vapor condensed, sticking onto the walls and thus sealing the murals in a very delicate, natural manner. When the processes of conservation began, this tiny wax layer was washed via special technology, without affecting the range of colors itself. That was exactly how the full magnificence of these unique murals shined – but unfortunately they remained unprotected at once, fully exposed to the intense erosion of the air. As UNESCO insisted, now they are covered by an additional layer, practically invisible for the human eye. This layer guarantees that the range of colors shall be preserved around 1,000 years ahead in the future,” our guide Todor Petrov says in conclusion. 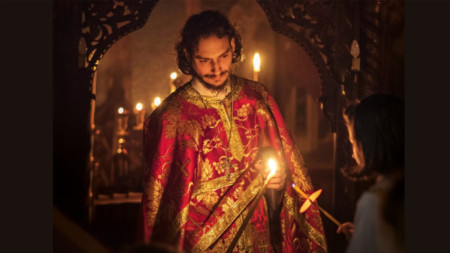